Connecting a Memphis Community to the Built Environment through Equity

In a typical online search for “North Memphis, Tenn.,” the web results headline stories of shootings and breaking news about police investigations. Extending this online search to images, the results illustrate a local homicide tracker and many police cars. These search results give few details to identify North Memphis as a significant community of Memphis, Tenn.—both historically and culturally, as well as being a safe, healthy and attractive place for citizens.

During the last half-century in Memphis and Shelby County, policies and infrastructure investments necessary to keep existing communities livable have not been recognized or implemented equitably throughout the region’s neighborhoods of color. In North Memphis, businesses and residents—many of whom are African-American and lifelong residents—have experienced racially inequitable investment and disinvestment for decades. Factories shuttered in the nation's shift away from a manufacturing economy have left behind contamination, blight and an unemployed workforce in North Memphis. The decades-long incremental disinvestment in the area is mirrored in North Memphis’ population statistics—39 percent of residents live below the poverty level.1

What do residents have to say about the disinvestment in their neighborhoods? Who engages with them to hear and act on this community’s need for access to public transportation, healthy foods, and safe and weatherized housing? The consequences of ignoring the North Memphis community’s need to level the playing field are very real and result in disparities in the health and well-being of its residents. As the people of North Memphis watch the reinvestment and expansion of structures and green spaces around them, they are recognizing that they have not had sufficient and intentional opportunities to be included in development decisions made around this community.

In 2017, Memphis was accepted to the Strong, Prosperous, And Resilient Communities Challenge (SPARCC). SPARCC is a collaboration between a number of national funders and technical partners, including Enterprise Community Partners, Low Income Investment Fund, Natural Resources Defense Council and the Federal Reserve Bank of San Francisco. The collaboration provides resources to support Memphis in understanding the underlying causes of economic and racial disparities, and in empowering people and leaders to invest in more effective models for systems change to remedy these disparities. Through SPARCC, Memphis joins a cohort of five other regions—Atlanta, Chicago, Denver, Los Angeles and the San Francisco Bay Area—seeking to build a healthy, resilient and equitable future for their communities.

Memphis was selected in part because SPARCC seeks to support regional systems changes to benefit low-income communities and communities of color in places where catalytic regional investment is occurring. Following the adoption of the Mid-South Regional Greenprint, which addresses regional challenges like climate change vulnerabilities, health, transportation and equity, North Memphis has begun to see several catalytic investments: A $60 million HUD National Disaster Resilience Competition (NDRC) grant was awarded to Shelby County to address unmet needs from 2011 flooding; the Crosstown Concourse is a $200 million redevelopment of a 1.5 million-square-foot blighted building into a new vertical mixed-use urban village; and the $9 billion expansion of St. Jude Children’s Research Hospital campus and ALSAC, its fundraiging organization, and growth of St. Jude’s workforce has ignited new investment in the infrastructure and housing options nearby. (See Figure 1.)

Target Areas for the Neighborhood Collaborative for Resilience 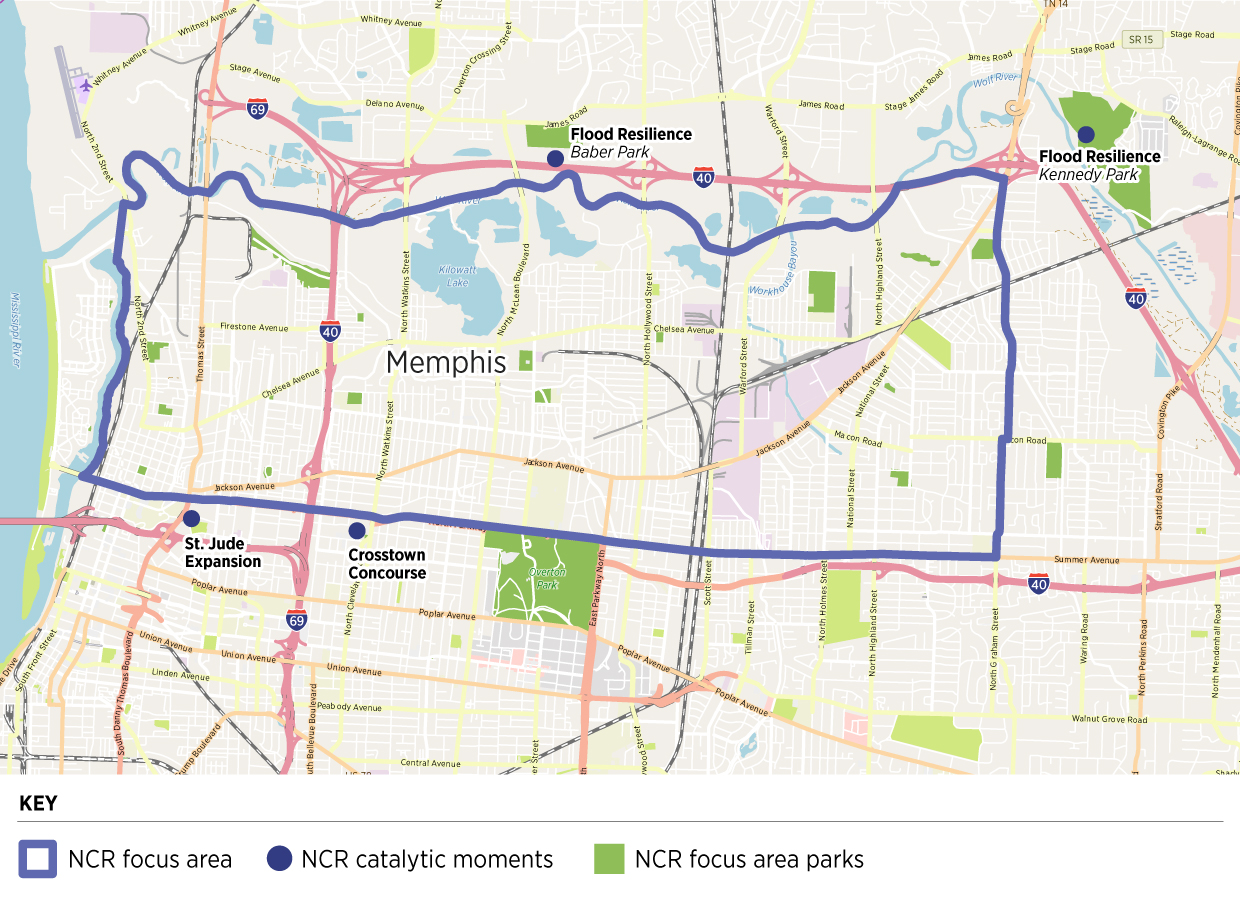 As these catalytic moments and substantial investments in the built environment are implemented, a positive and intentional connection with adjacent North Memphis neighborhoods has yet to be clearly drawn. But these investments made just outside the neighborhoods of greater North Memphis will profoundly affect those communities.

While working with North Memphis leaders and stakeholders, it becomes apparent that this confluence of planning and investment, while considered by some long overdue, is not seen in such a positive light by all those who stand to be impacted. This skepticism has manifested in growing fears of gentrification, displacement and the location of unwanted or unneeded developments within communities that have little to no say in those decisions. Through SPARCC, North Memphis residents, leaders and partners seek to ensure that the communities in which these investments are made directly benefit from them and have a say in how future investments in the built environment are made.

The SPARCC initiative seeks not only to leverage decision-making power but also to align capital investments in its six selected regions. In addition, this is an opportunity to access new capital funding sources, encouraging each site to develop a pipeline of projects that improve equity, climate and health outcomes.

Memphis’ approach through SPARCC is to have a collaborative effort led by the residents of North Memphis as they develop strategies for investments in the built environment, healthy housing and better connectivity, alongside funders, developers and institutions. By centering community engagement and leadership, this effort aims to produce plans and projects that truly reflect the needs, vision and goals of the community in a model that can serve as a regional example for more equitable decision-making in community development.

SPARCC has identified the collaborative table as the structure in which leaders from a range of sectors and disciplines come together to address complex social issues, recognizing that no single sector can solve such challenges on its own. In carrying out the SPARCC initiative in Memphis, the emerging collaborative has heightened the priority of community leadership. Memphis’ table—Neighborhood Collaborative for Resilience (NCR)—positions residents as the focal point, guiding and helping to implement the local work plan through the lenses of racial equity, climate resilience and health.

NCR’s governance structure is comprised of six components carrying out different phases of the Memphis SPARCC work plan. A community advisory board of residents representing the more than 20 individual North Memphis neighborhoods will identify the strategy and goals. Through three work groups representative of the three SPARCC lenses, residents and technical experts will craft the work to meet the goals. A steering committee will guide the implementation of the work plan alongside funders and strategic partners, which include institutions, policy professionals, data partners and developers. And BLDG (Build. Live. Develop. Grow.) Memphis—a supporter of this NCR table and the Memphis SPARCC initiative—will provide project management, administrative support, financial reporting and operational data.

As NCR moves along in this process, the hope is that policymakers, practitioners and developers will use data to make the case for equitable development and champion decision-making opportunities for North Memphis residents. In defining a new model for community inclusion, NCR will spur much-needed systems change in addressing racial inequity throughout the Memphis region for healthier, more resilient futures. NCR seeks to amplify the identity of the North Memphis community and improve its connections to the surrounding environment. The greatest achievements of these efforts will be seen as future search results for “North Memphis” include a strong depiction of its culture, community and attractiveness.

Bridges is a regular review of regional community and economic development issues. Views expressed are not necessarily those of the St. Louis Fed or Federal Reserve System.

All other community development questions