The mission of ECHO Housing Corp., founded in 1991, is to create affordable housing, provide supportive services and promote community development. Our vision is a community where everyone has a place to call home and the opportunity to thrive. Commissioned by the city of Evansville, Ind., ECHO and some community partners launched a comprehensive community development initiative in 2012—Jacobsville Join In (JJI)—to establish a resident-led quality-of-life (QoL) process for the Jacobsville community.

As a vibrant, “hip and cool” neighborhood where relationships flourish, Jacobsville will serve as a model for other neighborhoods, offering ample opportunities to build relationships, foster strong families, and establish “roots” in Jacobsville leading to well-maintained homes and businesses, transportation choices, educational opportunities for youth and adults, new and exciting retail establishments and restaurants, and safe and attractive public spaces. We are Jacobsville. Join In.

Jacobsville is located north of downtown Evansville and is a core urban neighborhood. It is comprised of 336 city blocks and is the largest and most densely populated neighborhood in Evansville, with nearly 7,000 residents and an estimated 8,000 jobs. The neighborhood has a rich history, unique culture and iconic landmarks, including the North Main Street business corridor, Garvin Park, Bosse Field and Willard Library. Despite these assets, Jacobsville has been plagued by high crime rates and drug activity, blight and urban decay, high poverty rates, a lack of major public financial investment, and low neighborhood bonding and a feeling of helplessness in residents.

As described by the Indiana Association for Community Economic Development (IACED), facilitators to the Jacobsville QoL plan development, a QoL plan is a way for a neighborhood to define and document a vision for the future rooted in its assets, available resources and the passion of local residents and stakeholders. Because it was developed by Jacobsville residents and stakeholders, they have “skin in the game” and engage in implementing the plan and improving the quality of life in the neighborhood. The QoL plan establishes a way for locals to hold each other accountable through actions with performance measures. Coordinating across topical areas for a specific neighborhood, the plan ensures that projects are rooted in a common vision rather than individual endeavors that don’t build toward success for the community. It can also be used to leverage external resources, primarily power (political) and capital (money).

IACED uses principles of comprehensive community development and healthy neighborhoods in the QoL process, including civic, social, physical and economic factors. The aim is for people living, working and raising families in the community to take part in the development of the plan. The Jacobsville process had three phases: organize, decide and act. Residents participated through interviews, visioning, goal setting and storytelling.

The first phase, “organize,” included bringing the neighborhood together and empowering residents. It involved developing relationships and learning about people’s concerns and passions through a series of one-on-one interviews—not to solve problems, identify needs or share information, but to listen to what people who live in and are stakeholders in the neighborhood thought about their community and learn what they were passionate about.

The second stage, “decide,” developed the Jacobsville vision at a neighborhood workshop (see box). From the vision, working groups were established; group members were trained to develop goals and action plans that included specific activities, responsible parties, time lines and performance measures. The outcome of their work formed the Jacobsville QoL plan, which established a way for residents and stakeholders to hold each other accountable. Coordinating across six key themes (Housing, Safety/Cleanliness, Business Corridors, Youth/Education, Employment and Infrastructure/Parks), the plan ensured that projects were rooted in a common vision for the neighborhood’s success.

“Act”—the final stage of the process—included going public with the QoL plan through a rollout celebration and doing the hard work of implementing the plan. It continually involves monitoring the progress of the plan and evaluating whether changes are needed to be successful. Jacobsville work groups now meet monthly to develop and implement action steps to achieve goals on topics that are important to the neighborhood. 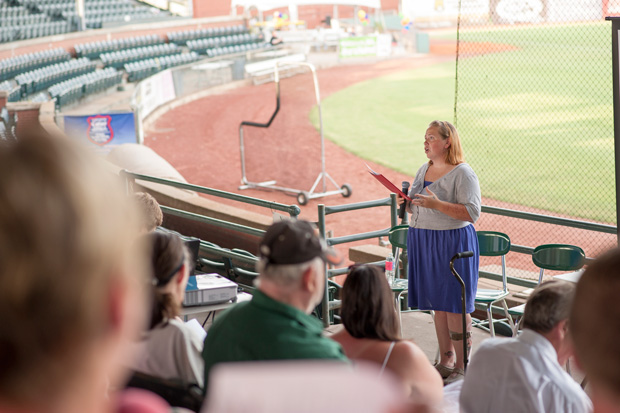 During the Quality of Life Plan rollout, Melissa Tines announces the goals developed by her work group to improve safety and cleanliness in the neighborhood.

While the QoL plan was being developed, JJI established a community-driven fund to show potential investors that residents and stakeholders were 100 percent vested in the neighborhood vision. Locals provided their thoughts and ideas, “TWO Cents,” to develop their own vision and goals for the neighborhood, as well as two cents (pennies) to demonstrate their financial commitment. The goal was to collect $304.66; the aim was not to have the most money, but to have the most vested community. We collected two cents to represent every resident and stakeholder in the neighborhood—about 30,466 pennies! The funds collected will be used toward a future community project and as leverage to attract additional funding to implement the quality of life plan.

How did we come up with the numbers? Here is the math…

To build on the QoL process, JJI also offers early action grants for people and organizations to foster community pride and spirit. Early actions are opportunities for small improvements to be made in Jacobsville that demonstrate progress. Grants for these small projects, called “Awesome Ideas,” encourage anyone and everyone to submit an application for a project idea that could help improve the neighborhood. Since 2013, JJI has given $15,000 in the form of small grants ($250 to $1,000 each) to individuals, businesses and organizations. Grant projects range from litter cleanups and block parties to leadership development. 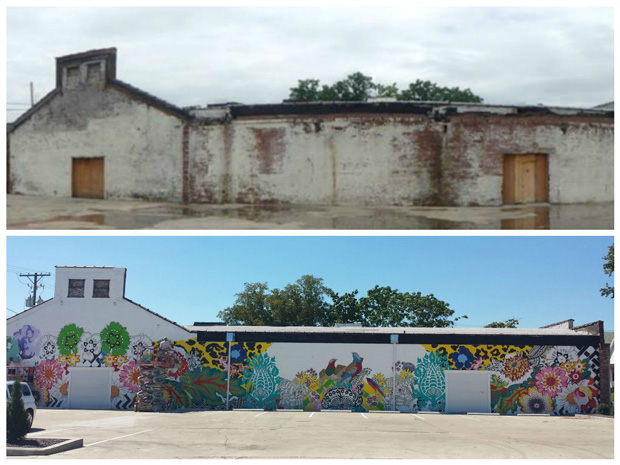 Before (top) and after photos of the North Main Street Community mural, designed by artist Artur Silva. Photographed fabric swatches from residents were compiled into the mural design, which was sketched and painted by local artists and neighborhood volunteers on the 128-foot warehouse wall.

To further community engagement and build on the momentum of the QoL process, JJI organizes neighborhood gatherings, offering opportunities for resident involvement at every level. The gatherings have included crockpot dinners at the JJI office, neighborhood walks and special events like neighborhood Christmas caroling and painting a 128-foot community mural. The engagement activities have opened gateways for community collaboration by encouraging resident bonds. As our role grows in the Jacobsville neighborhood, we will continue to see that the people and structures are in place to create coherence and integrity, engaging people to work together and empowering people to become change-agents for their neighborhood.

JJI maintains a conveniently located office that serves as home base for the initiative’s staff and as a place people can come to meet, share ideas and learn about JJI.

Bridges is a regular review of regional community and economic development issues. Views expressed are not necessarily those of the St. Louis Fed or Federal Reserve System.

All other community development questions