Russia's Economy Is Catching the U.S.'s, but It Has a Long Way to Go 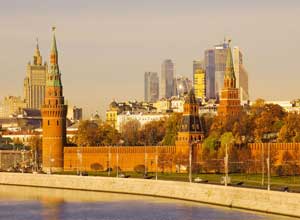 Russia is catching up with the U.S. in terms of gross domestic product (GDP) per capita, according to a recent article in The Regional Economist. However, it still has a long way to go.

Vandenbroucke looked at three periods regarding real GDP per capita: 1989 to 1998, 1998 to about 2008 and 2008 to the present. For the first period, Russia’s economy declined considerably, with GDP per capita in 1998 at 56 percent of its 1989 value. For comparison’s sake, U.S. and world GDP per capita rose 17 percent and 10 percent, respectively, over the same period.

In the third period, growth in Russia’s GDP has slowed considerably. However, as Vandenbroucke wrote: “It is too early to assess whether this pause is going to last a long or short time.”

Vandenbroucke discussed a study by economists Revold Entov and Oleg Lugovoy that decomposed GDP growth into three factors: capital, labor and productivity.1 This study showed that Russia’s negative growth during the 1989-98 period resulted equally from lower productivity, employment growth and capital utilization. However, Russia’s growth rate was stronger than the U.S.’s over the next 10 years. Referencing the study, Vandenbroucke wrote: “Productivity growth was the main reason, accounting for 59 percent of the GDP growth. The contributions of capital and labor were smaller, 28 and 13 percent, respectively.”

Vandenbroucke noted that an increase in GDP per capita doesn’t necessarily mean an increase in the well-being of the population. To explore Russia’s well-being, he examined the evolution of its population since 1998 and compared it with Venezuela.2 (Venezuela was chosen because these two countries had similar levels of GDP per capita relative to the U.S. for most of the period.)

He found that Russia was adversely affected by factors other than GDP per capita that resulted in a 3 percent decline of its population between 1998 and 2014. Venezuela’s population grew 30 percent during the same period.

Vandenbroucke concluded that Russia has a long way to go to catch up with the U.S. in terms of GDP per capita, but the gap is closing, thanks to productivity growth. He wrote: “But a deeper problem faces Russia: Why is its population shrinking? Will this phenomenon last, or will population rise again?”

2 Vandenbroucke noted that population is not a direct measure of well-being. He wrote: “The assumption behind the analysis is rather that the two are positively correlated: When a population’s well-being increases, life expectancy may increase as well (because of improvements in health, for example). In addition people are more willing to enter the country and less willing to leave it. All these factors contribute to increasing the country’s population.”

Output
Labor Markets and Unemployment
Subscribe to On the Economy