It's the Older Workers Who Have the Job Skills 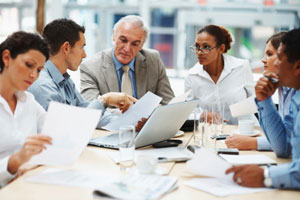 As a society, we may be youth-crazed, as evidenced by the plethora of creams, workouts and tonics promising to erase and reverse the inevitable effects of wear, tear and whatever environmental toxins are. The labor market has its own version of this phenomenon in the way it idealizes archetypal wunderkinds working in the most highly technical, skilled jobs. These characters tackle the hardest, most cognitively demanding problems and are so effective that we are willing to forgive their dismissal of business casual dress. However, older, more experienced workers actually do more cognitively intense work on average.

As workers get older and more experienced, the types of occupations they work in will change. In general, the skill content of the jobs goes up, and it goes up uniformly across types of skills. To put this another way, as workers become older and more experienced and change jobs and occupations, they will tend to switch into occupations that use more skills, both cognitive and noncognitive. We show these trends in the first two figures below. We grouped workers by age and labor market experience and then computed the average of three types of skills used by the worker's occupation: verbal, math and social.

To create these figures, we used data from male respondents in the 1979 cohort of the National Survey of Youth. Every year of the survey, this group reported their occupation, and we assigned skills to occupations as described in the paper “Multidimensional Skill Mismatch,” which I co-wrote with Fatih Guvenen, Burhanettin Kuruscu and Satoshi Tanaka.1 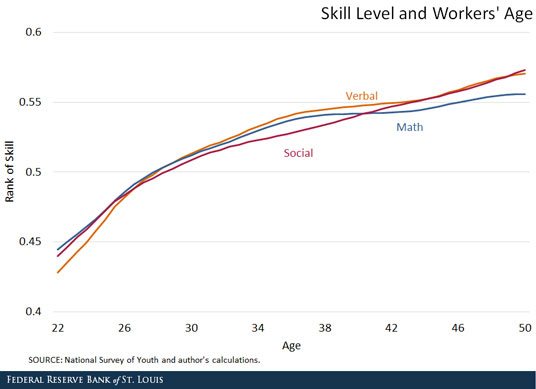 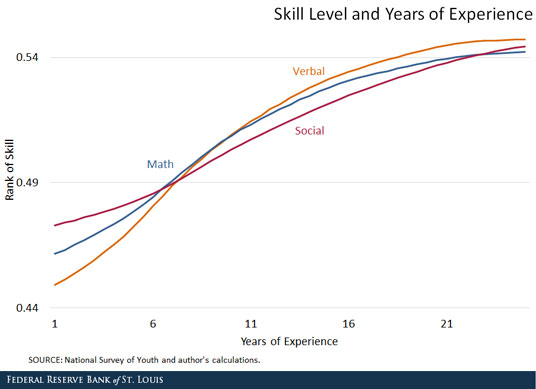 In each skill type, workers sort themselves into more skill-intensive occupations as they age and gain more experience in the labor market. Experience and age are quite correlated and differ only in that some workers begin later because of additional schooling or because they drop out of the labor force for some period.

The profile in experience is slightly flatter than in age, which makes sense if there are some younger workers who enter the labor market and do substantially lower-skill work while others are still in school. Then, once these workers enter, they are slightly older and have higher skills but still zero labor market experience. These differences in start date will also affect older and more experienced workers, where some highly experienced workers are such because they have been working longer, because they have less education. The differences, however, are marginal.

Additionally, we split the sample into high school graduates and those with at least some college. In the figures below, we plot the experience profiles, which are more easily comparable than age profiles given that different groups spend different amounts of time in education. 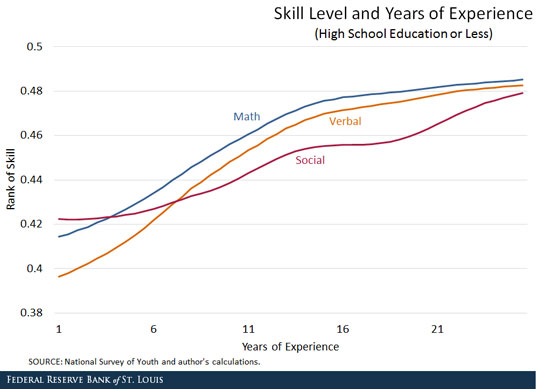 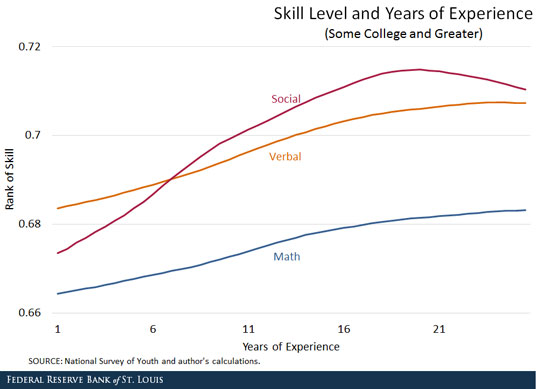 Both groups have substantial rises in their skill profiles, though job-skill levels for the college educated group are generally higher than for those with only high school diplomas. In their trends, some interesting differences also emerge: The rise in math skills is less stark among the college-educated, and verbal skills rise quickly in the occupations of those without college backgrounds. For those with college educations, the social skill requirements of their occupations rise fastest, while that profile rises the slowest among the others.

These figures paint a general picture that workers take different types of occupations as they gain experience in the labor market. This is undoubtedly part of the general gains to experience labor market economists find: Workers with more labor market experience get paid more, and they do jobs that require more skill. Of course, this sorting also reflects that, over time, they have accumulated more skills to perform these tasks. The same can be stated across education groups: Workers who have been to college do different types of occupations, which demand more skills and pay a premium.

1 Generally, analysts focus on male respondents in this data set because the life-cycle profiles of women may be affected by the larger time trends involving women entering the work force in larger numbers.

Labor Markets and Unemployment
Demographics
Subscribe to On the Economy