Eighth District banking has undergone several sweeping changes in the past decade. And one of the more interesting trends is District bankers' increasing reliance on mortgage lending to pay the bills.

The composition of the Eighth District loan portfolio has changed radically over the past 10 years (see chart). At year-end 1987, roughly 41 percent of loans at District institutions were backed by real estate, 25 percent were made to commercial customers, and 22 percent went to consumers. By the end of 1997, real estate lending made up 60 percent of the District portfolio, while commercial loans accounted for 17 percent and consumer loans 16 percent. Moreover, almost all of the increase in real estate lending was in home mortgage loans. This portfolio shift could have profound implications for District bank risk, particularly at the community bank level.

Changes in the District Loan Portfolio 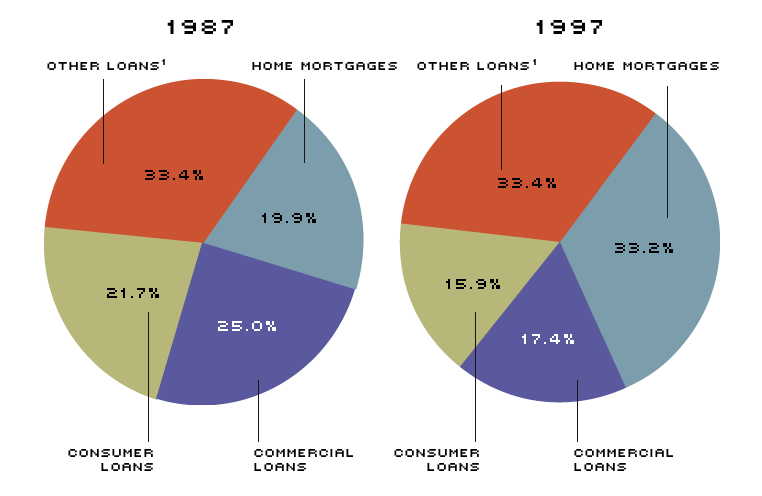 Houses Falling from the Sky

Between 1987 and 1997, outstanding home mortgages in the United States more than doubled, jumping to $4.02 trillion.1 Although this increase clearly reflects the combination of a lengthy economic expansion, a long slide in the unemployment rate, and a precipitous drop in mortgage interest rates, financial innovation has also played an important role. The development of credit-scoring models, for example, has lowered the cost of issuing mortgage loans by enabling quicker and more accurate evaluation of prospective borrowers.2 At the same time, securitization programs, which make possible the packaging and selling of loans, have greatly improved the liquidity of mortgage loans. Because these loans can now be quickly moved off of bankers' balance sheets, mortgage lending is much less risky.

Meanwhile, commercial banks have carved out a larger slice of the growing mortgage market, both inside and outside the Eighth District. Outstanding home mortgages at U.S. commercial banks grew an average of 10.6 percent a year between 1987 and 1997, raising the bank portion of the market from 13.4 percent to 17.8 percent. At Eighth District banks, the trend was even more pronounced, with outstanding one- to four-family mortgages rising at 11.9 percent a year. These numbers actually understate commercial bank involvement in the home mortgage market since many bank-originated mortgages are promptly sold in secondary markets.

Bank mortgage lending has been carried away by a number of factors, including the decline of the savings and loan industry. In the 1970s and early 1980s, record interest rates, coupled with heavy dependence on mortgage lending, caused many savings and loans (S&Ls) to lose money and ultimately fail. In addition, in the late 1980s and early 1990s, many banking organizations acquired S&Ls to expand their retail operations. The combination of outright failures and absorption by banks cut the number of S&Ls almost in half between 1987 and 1996—from 3,622 to 1,924.

As thrifts failed or were acquired, mortgages moved to commercial bank loan portfolios. In 1997, for example, Mercantile Bank of Hartford, Ill., (formerly of St. Louis) acquired Roosevelt Bank of St. Louis (a federal savings bank), thereby moving $3.6 billion in mortgages—on paper—from the S&L industry to the banking industry. In addition, banks are now originating and holding mortgages that S&Ls would have previously made. The impact of these factors can be seen in the drop-off of mortgages on the books of S&Ls. Between 1987 and 1997, when home mortgages held by U.S. commercial banks were rapidly increasing, those on the books of S&Ls dropped by almost a third, to $519 billion.

The Federal Home Loan Bank (FHLB) system has also provided a spark for bank mortgage lending. Although originally designed to promote home ownership by providing liquidity to S&Ls, the FHLB system has been open to commercial banks since 1989, reflecting the increasing importance of banks in the mortgage market. Banks that join receive access to a wide range of low-cost services, including various types of loans. These loans have proven especially popular in recent years, due to the slow growth of core deposits.3

To join the FHLB system and obtain access to loans, a bank must devote at least 10 percent of its asset portfolio to home mortgages or mortgage-backed securities. Moreover, these mortgages or mortgage-backed securities must usually be pledged against FHLB loans. In short, as S&Ls became less and less important players in mortgage lending, the FHLB shifted its focus to banks. In turn, banks both inside and outside the District responded by boosting mortgage lending to secure a replacement for core deposits.

The popularity of commercial paper is another reason banks have turned to mortgage lending. Over the last decade, financial innovation has reduced the costs of borrowing with commercial paper, enabling more firms to obtain working capital without going to the bank.4 In 1987, banks lent to nonfinancial firms $7 for every $1 these firms borrowed in the commercial paper market; by 1997, that ratio had dropped to $4 to $1. At the same time, finance companies have used commercial paper to fund consumer loans, enabling households to finance cars, appliances and other durable goods, also without going to the bank. As a result, over the past 10 years, the percentage of consumer credit provided by banks fell from 49 percent to 41 percent. The shift to mortgage lending, then, can be viewed as an attempt by commercial banks nationwide to make the best of a bad situation. Simply put, mortgage lending is a replacement for lost business.

What does the portfolio shift imply about banking risk in the Eighth District? On the one hand, greater reliance on mortgage lending may lower a bank's exposure to credit risk, which is the risk a borrower will fail to make interest and principal payments. Since 1991, the District net charge-off rate for commercial loans has averaged 0.72 percent, and the net charge-off rate for consumer loans has averaged 0.91 percent.5 Net losses on one- to four-family mortgages, in contrast, have averaged just 0.09 percent. The relatively lower historical loss rates on mortgage lending suggest that the portfolio shift may reduce the overall District charge-off rate in the future.

On the other hand, the shift toward mortgages and mortgage-related products may increase a bank's exposure to interest rate risk, which is the risk that a change in interest rates will lower a bank's earnings and net worth. Because mortgage loans typically have a longer duration than commercial and consumer loans, banks holding a large inventory of home loans may be vulnerable to unexpected interest rate spikes—just as S&Ls were in the 1970s and 1980s.6 Mortgage-backed securities may add to this risk since their value can fluctuate wildly in response to interest rate movements.

Although the net impact of the shift to mortgage lending on overall District banking risk is unclear, there is reason to be particularly concerned about the implications for community banking. This is so because community banks are busy substituting liquidity and interest rate risk—which they have relatively little experience managing—for credit risk—which they have historically managed fairly well. Moreover, community banks could face a serious liquidity crunch if either an adverse shock to real estate markets or a major recession were to compromise the ability of Federal Home Loan Banks to continue providing low-cost advances. In short, the shift in the loan portfolio implies that District bankers—particularly community bankers—are facing new types of risk. Getting to the Emerald City demands that these risks be successfully managed.

Neely, Michelle Clark. "Both a Lender and a Borrower Be: Banks Cope with a Deposit Shortage," The Regional Economist, Federal Reserve Bank of St. Louis (January 1998), pp. 12-13.