What are open market operations? This means the central bank is buying or selling securities in the open market as a way to implement monetary policy.

The most well-known role of the Federal Reserve is to set monetary policy.

All eyes are focused on the statements issued after meetings of the Fed’s monetary policymaking body, the Federal Open Market Committee (FOMC). People await the FOMC’s decision for its impact on the interest rates we use for home loans and other forms of credit.

While the FOMC statement itself gets the attention, it’s what happens afterward that truly makes a statement where the economy is concerned. This occurs through a process that takes place every day via the Federal Reserve Bank of New York, called open market operations.

Open market operations refer to central bank purchases or sales of government securities in order to expand or contract money in the banking system and influence interest rates.

The FOMC ordinarily meets eight times a year to assess the condition of the U.S. economy and make a decision regarding monetary policy, including whether to change the target range for the federal funds rate.

The federal funds rate is the interest rate that banks charge each other for overnight loans.

Banks may borrow in the federal funds market to ensure that they have enough reserves to meet their payments needs; to satisfy regulatory requirements, such as the minimum requirements for reserves and liquidity; and to receive the interest paid on reserve balances by the Fed.

Movement in the federal funds target rate most closely affects other shorter-term interest rates, such as on three-month Treasury bills. But it can also affect other interest rates in the economy, such as rates for consumer and business loans and longer-term debt.

These monetary policy decisions can, in turn, affect consumer and producer decisions that ultimately impact the level of employment and inflation in the U.S. economy.

It’s important to understand that the Federal Reserve can buy or sell securities, including government securities like Treasury bonds. These buy-and-sell transactions are the “operations.”

The term “open market” refers to the fact that the Fed doesn’t buy securities directly from the U.S. Treasury. Instead, securities dealers compete on the open market based on price, submitting bids or offers to the Trading Desk of the New York Fed through an electronic auction system.

The use of open market operations as a monetary policy tool ultimately helps the Fed pursue its dual mandate—maximizing employment, promoting stable prices—by influencing the supply of reserves in the banking system, which leads to interest rate changes. 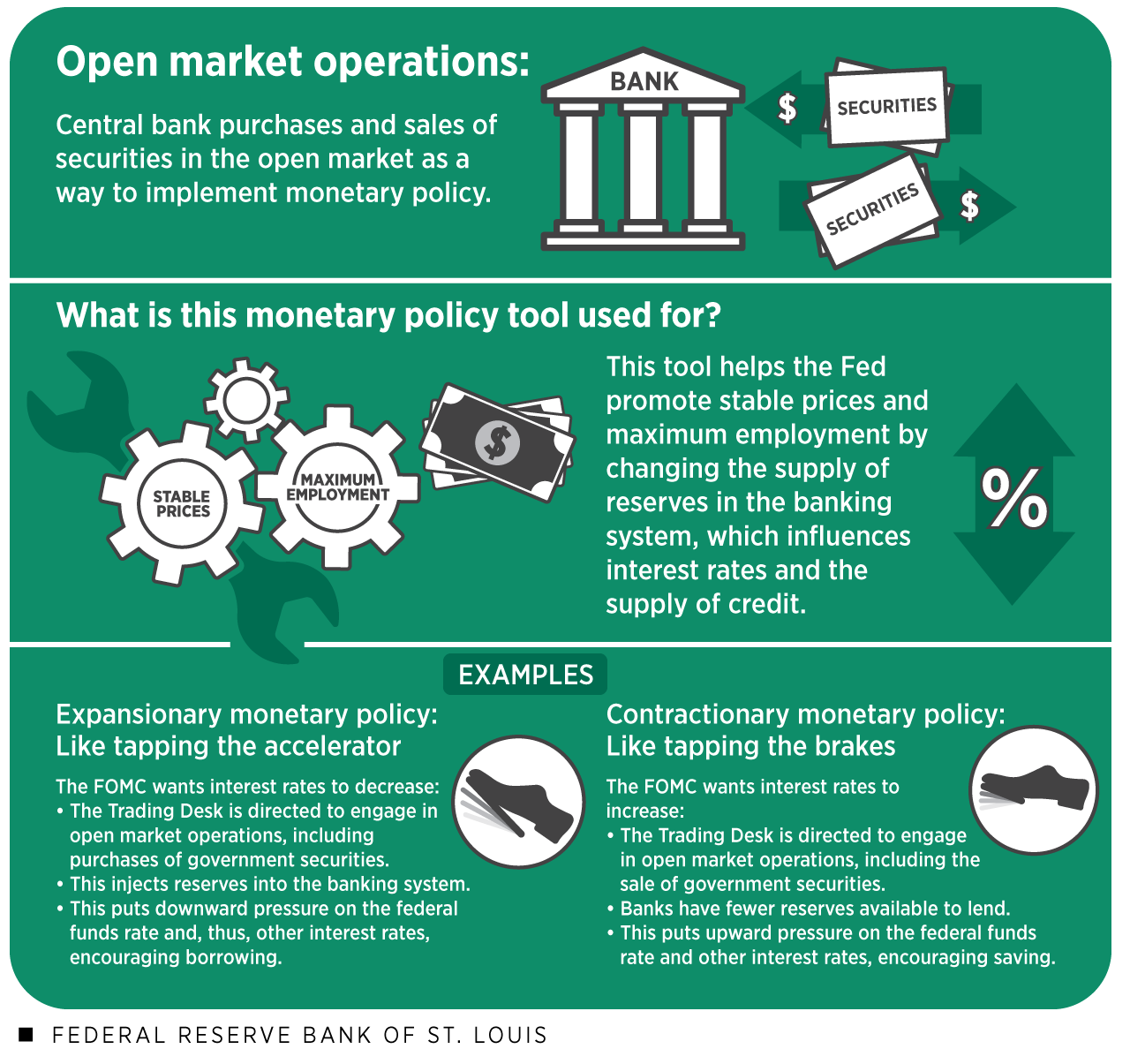 Note: Most operations are not outright purchases or sales of transactions but rather repurchase or reverse repurchase transactions. The New York Fed’s Open Market Operations tutorial describes these “repos” or “reverse repo transactions” in more detail.

When the Trading Desk purchases government securities, such as Treasury bonds, the Fed deposits funds into the bank accounts of the sellers.

That payment becomes part of the reserve balances that commercial banks hold at the Fed; this increases the amount of funds that banks have available to lend.

Policymakers refer to this as “easing” or expansionary monetary policy—pushing on the gas pedal to give the economy more fuel and to encourage economic activity, such as in times of slower employment growth or a potential economic downturn.

When the Fed sells some of the government securities it holds, buyers pay from their bank accounts. This shrinks the funds that banks have available to lend.

That creates upward pressure on the federal funds rate, since banks have fewer reserves available to lend and will charge more to lend them.

As the federal funds rate increases, so do other rates. Individuals and businesses are then less likely to borrow, since it’s more expensive, and may be more likely to save their money and earn that higher interest.

Policymakers call this “tightening” or contractionary monetary policy—tapping the brakes to slow down the car and restrain spending when price stability is at risk due to higher-than-desired inflation.

Open market operations are one of multiple tools that the Federal Reserve uses to enact and maintain monetary policy, along with changing the terms and conditions for borrowing at the discount window and adjusting reserve requirement ratios.

These tools have been around since before the financial crisis.

After reducing the federal funds target close to zero during the financial crisis, the FOMC turned to another type of policy to provide liquidity to the financial system and to encourage recovery: the purchase of large amounts of longer-term U.S. Treasury securities and mortgage-backed securities, also through open market operations.

Such large-scale operations are widely referred to as quantitative easing, which substantially expanded the size of the Fed’s balance sheet during the crisis and subsequent recovery.

The Fed paid for those purchases by adding funds to reserve deposits, resulting in reserve balances far in excess of banks’ legal requirements. 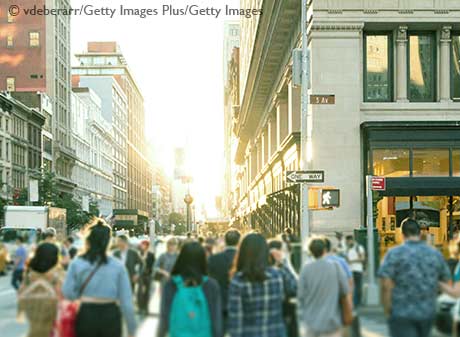 During the financial crisis and recession, monetary policymakers looked beyond traditional open market operations to influence the federal funds rate.

The Fed undertook a process—sometimes referred to as quantitative tightening—to unwind the asset side of its balance sheet. But with ample reserves on the liabilities side, open market operations evolved.

With such a large quantity of reserves in the banking system, the Federal Reserve could no longer effectively influence the federal funds rate by small changes in the supply of reserves, explained Economic Education Coordinator Scott Wolla in a recent issue of Page One Economics.

The Fed has modified its monetary policy strategy to include a new tool supplied by Congress during the financial crisis: Paying interest on the reserves that banks hold at the Federal Reserve in excess of legal requirements, and then changing that interest rate periodically to ease or contract policy. This tool is often referred to as the IOER (or interest on excess reserves) rate.

Wolla noted that “the Federal Reserve moves the [federal funds rate] into the target range set by the FOMC primarily by adjusting the IOER rate.”

Expansionary monetary policy action: The Trading Desk at the New York Fed is directed to engage in open market operations, including purchases of government securities, to ensure that the federal funds rate trades within a new lower range set by the FOMC.

Contractionary monetary policy action: The Desk is directed to engage in open market operations, including the sale of government securities, to ensure the fed funds rate trades within a new higher range the FOMC set.

In a post-Great Recession world: During the financial crisis and recession, monetary policymakers looked beyond traditional open market operations to influence the federal funds rate. The Fed made large-scale open market purchases to encourage economic recovery.

Laura Hopper is the St. Louis Fed's employee ambassador coordinator. She works in the External Engagement and Corporate Communications Division.

Laura Hopper is the St. Louis Fed's employee ambassador coordinator. She works in the External Engagement and Corporate Communications Division.