In a recent issue of Housing Market Perspectives, William R. Emmons, lead economist with the St. Louis Fed’s Center for Household Financial Stability, found the answer may lie in the primary or retail mortgage market.

The last time the difference, or spread, was this large was in 2008, during the depths of the Great Recession, and the time before that was in 1986, as seen in the figure below. 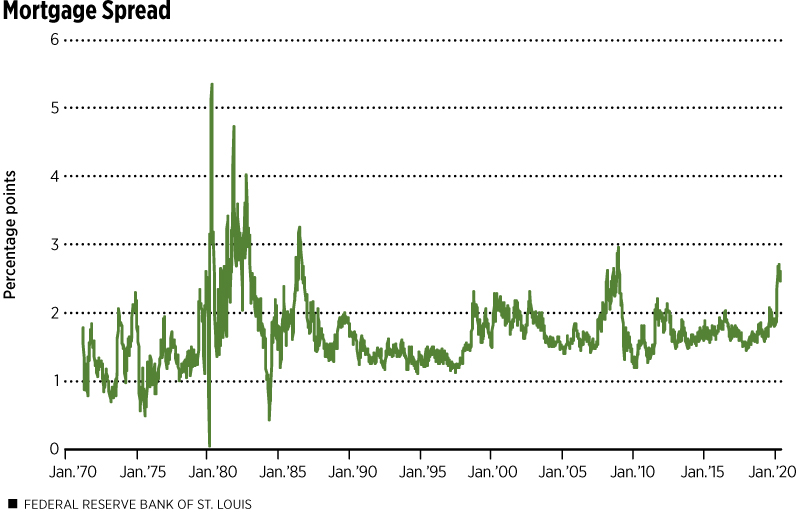 SOURCES: Freddie Mac, Federal Reserve Board and author’s calculations.
NOTES: The mortgage spread is the difference between the Freddie Mac Survey 30-year mortgage rate and the 10-year Treasury yield. Data are weekly averages.
DESCRIPTION: The figure shows the mortgage spread from January 1970 to May 28, 2020. The spread is roughly 1 to 2 percentage points for most of the period, with spikes during periods of extreme rate volatility.

In a broad sense, the large spread between mortgage rates and Treasury yields means monetary policy has had a weaker impact on the economy than the drop in Treasury yields alone would suggest, the author noted.

Evidence suggests that various factors in the primary market are likely causing mortgage rates to be unusually high compared with Treasury yields, according to Emmons. These may include decreased capacity in mortgage origination or servicing, more caution among lenders, and less lender competition than usual. Another issue could be financial weakness among leading nonbank mortgage originators, which aren’t passing on lower rates to household borrowers, as they might otherwise.

The secondary mortgage market can also influence the spread because of the time value of the investment and the interest rate risk associated with mortgage investments, he noted. This relationship between the price of mortgage-based securities and risk is very sensitive to variables such as recessions, financial crises and changes in government policy. 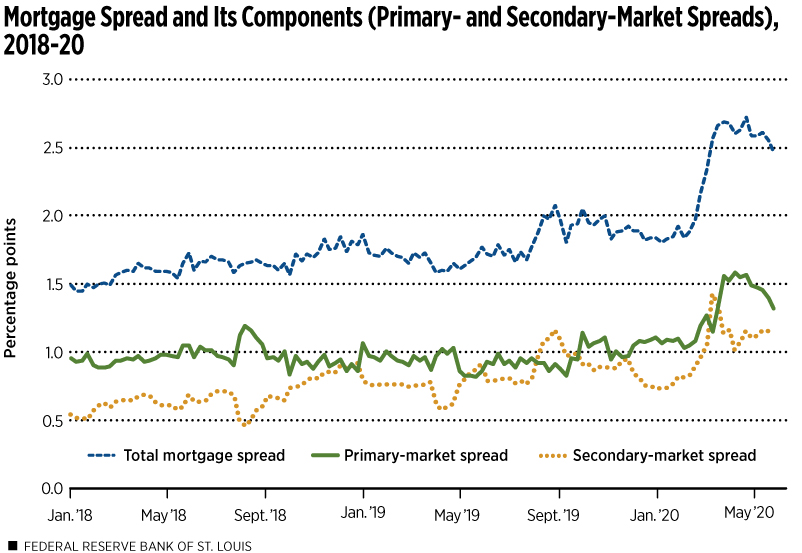 He found that the failure of the 30-year mortgage rate to decline in lockstep with the 10-year Treasury yield probably reflected the primary mortgage market’s sluggish adjustment to changed circumstances.

The author looked at both spreads from 2007-09. For most of 2007-08, the main contributor to the overall increase was a rising secondary-market spread. Starting in December 2008, however, short-term spikes in the primary-market spread helped push up the overall mortgage spread before declining in January 2009.

“If the current episode tracks the 2007-09 period in qualitative terms, we should expect primary-market spreads to decline in the near future,” Emmons wrote. “If long-term Treasury yields remain very low, ... this would put the mortgage rate below 3%, the lowest in more than 50 years.”

Housing
Interest Rates
Financial Markets
Subscribe to On the Economy