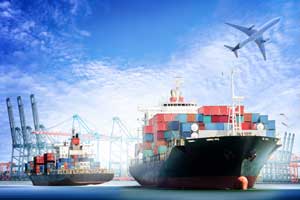 The U.S. has recently been implementing significant changes in its trade policy. Among these changes, the U.S. is raising tariffs on a number of goods imported from China, which accounted for around $50 billion in 2017.

In a recent study, Chad Bown, Euijin Jung and Zhiyao Lu of the Peterson Institute for International Economics classified the type of goods affected by this tariff hike according to their use into:

The figure below shows that imports of production inputs (capital equipment and intermediate inputs) account for the vast majority of the total imports value among the goods affected by the tariff hike.

While higher tariffs could benefit domestic firms by improving their competitiveness vis-à-vis the rest of the world, raising tariffs on production inputs may end up hurting them by raising their costs of production.

In the rest of this article, I examine the extent to which raising tariffs on intermediate inputs may impact the U.S. manufacturing sector. To do so, I examined:

I used data from the Organization for Economic Cooperation and Development for 2011 (the latest year available) to compute these indicators across 16 industries within the U.S. manufacturing sector.Industries are categorized according to the ISIC rev. 3 industry classification.

Moreover, I found that a significant fraction of intermediate inputs is sourced internationally: On average, 22 percent of the total expenditure on intermediates is purchased from abroad.

This evidence suggests that raising tariffs on intermediate inputs may have a significant negative impact on U.S. manufacturers. By raising the price of intermediates, the recent tariff hike may force U.S. manufacturers to raise prices, thus hurting consumers and leading to cuts in production. Moreover, some firms might not be able to compete in this alternative environment and might have to shut down.

Which Industries May be More at Risk?

While the aggregate evidence shows that intermediate inputs are very important for U.S. manufactured goods, there is considerable heterogeneity across different industries. 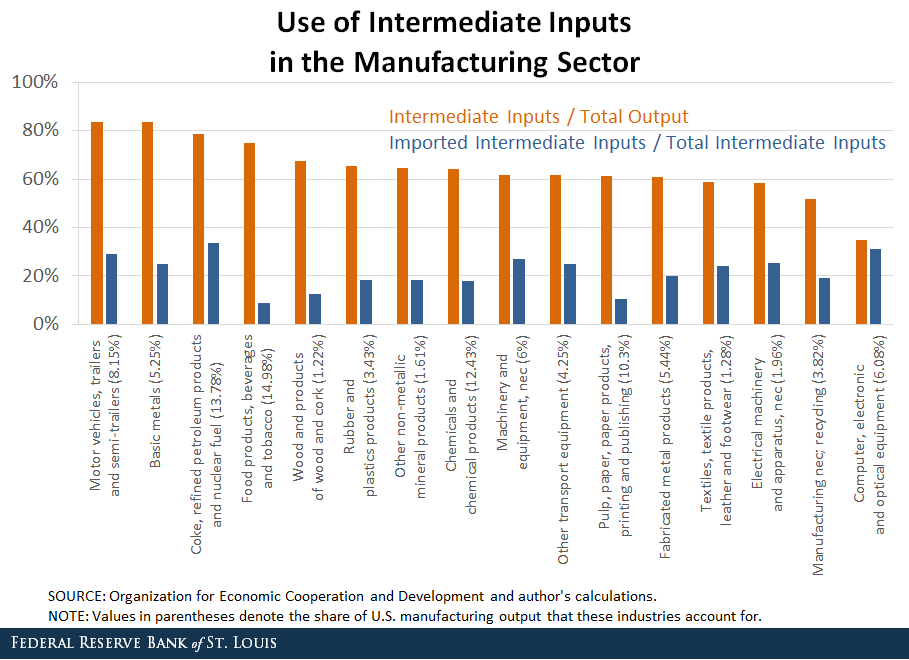 The orange bars report the share of intermediates in total output for each industry, while the share of U.S. manufacturing output that these industries account for is reported in the x-axis alongside the industry name.

I found that intermediate inputs account for more than 50 percent of the value of total output in all industries except the computer, electronic and optical equipment industry.

The blue bars report the share of imported intermediates in total intermediates for each industry. I found that there is considerable dispersion in the source from which different industries purchases their intermediate inputs.

On one end, the motor vehicles, trailers and semi-trailers and the computer, electronic and optical equipment industries purchase around 30 percent of their intermediates from abroad. On the other end, the food products, beverages and tobacco and the pulp, paper, paper products, printing and publishing industries only source around 10 percent of their intermediates internationally.

This evidence suggests that there might be considerable dispersion in the potential impact of the recent tariff hike across industries. Nevertheless, one thing is clear: All industries within the U.S. manufacturing sector make intensive use of intermediate inputs and source at least 10 percent of these internationally. Insofar these imported intermediates are hard to substitute with domestic counterparts, then they are likely to have a significant impact on the functioning of U.S. manufacturers.

Further research needs to be conducted to quantify the extent to which these effects might impact employment and economic activity.

1 For details, see the Office of the United States Trade Representative’s statement on Section 301 action.

4 Industries are categorized according to the ISIC rev. 3 industry classification.

Fernando Leibovici is an economist at the Federal Reserve Bank of St. Louis. His research focuses on international trade, finance and macroeconomics. He joined the St. Louis Fed in 2016. Read more about the author and his research.

Fernando Leibovici is an economist at the Federal Reserve Bank of St. Louis. His research focuses on international trade, finance and macroeconomics. He joined the St. Louis Fed in 2016. Read more about the author and his research.