Which Regions Have Recovered from the Great Recession? 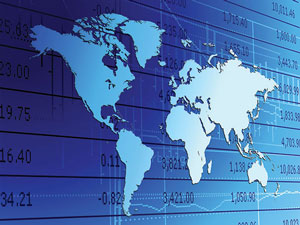 This post is the first of a two-part series exploring how nations have recovered from the Great Recession. The second post, “China’s Impact on Global Recovery from the Recession” will appear on Thursday, Oct. 29.

St. Louis Fed Assistant Vice President and Economist Yi Wen and Senior Research Associate Maria A. Arias used data from the International Monetary Fund’s (IMF’s) World Economic Outlook database for the period 2008-2014. The goal was to see how gross domestic product (GDP) fared among broad geographical regions during and after the recession.1 The results are in the table below. 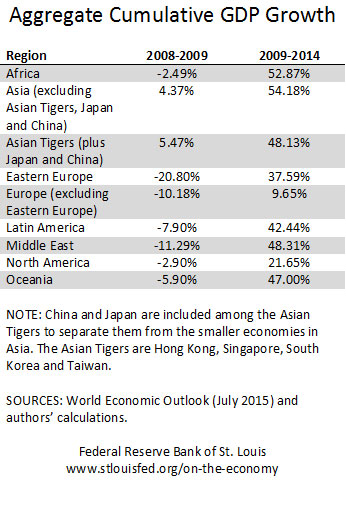 Wen and Arias also looked at overall GDP growth for some of the regions over the full period. As may be surmised from the table above, the Asian Tigers (including China and Japan) have seen continuous substantial growth without experiencing a sharp decline. Latin America and North America have grown past their prerecession peaks. Europe, however, “has not recovered from the crisis and has shown almost no growth since 2012, with output still below its prerecession peak,” according to the authors. (For a figure showing these trends, see The Regional Economist article “Recovery from the Great Recession Has Varied around the World.”)

Why have recovery rates around the world differed? Thursday’s blog post will discuss some of the reasons for the disparities.

1 The authors split the full period into two parts: the recession (2008-2009) and the recovery (2009-2014). The authors defined the recession period as such—rather than the National Bureau of Economic Research’s definition of December 2007 through June 2009—because they were using annual data aggregated by region.