Many Households Remain Underwater on Their Mortgages

Default on mortgage debt played an important role in the recent financial crisis. Research at the Federal Reserve Bank of St. Louis shows that the decline in house prices was the fundamental driving force behind the increase in defaults. After the decline in house prices, many households owned homes worth less than their mortgage. (That is, they had negative home equity.) In general, while only a small fraction of households with negative equity actually default on their mortgages, negative equity is a necessary condition for default. Otherwise, households would sell their houses, pay back their mortgages and keep any remaining funds.

The Federal Reserve Board of Governors collects data every three years regarding family incomes, net worth, balance sheet components, credit use and other financial outcomes. We used the recently released 2013 Survey of Consumer Finances to compute the percent of households with higher risk of default:

Since the values of the houses included in the survey are self-reported, the numbers should be interpreted carefully, because households living in their houses for long time may not have a good estimate of their house’s value. 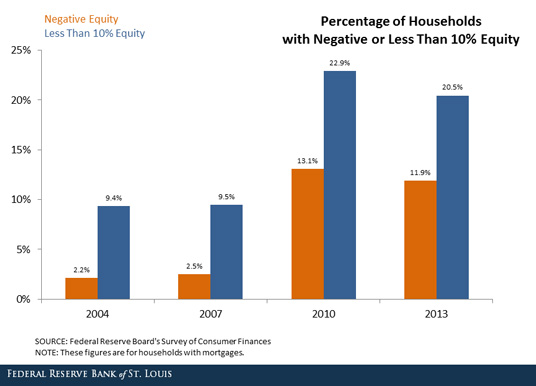