What Private Payroll Employment Numbers Say about the Labor Market

June marked the 52nd consecutive month of net private job growth. Even though we might think this is positive news, measuring the health of the labor market depends not only on how many jobs are created, but also which types of jobs are created. If part-time jobs are all that’s being created, labor might be underutilized, and the health of the labor market might not be as strong as we think.

To more fully gauge the health of the current labor market, we studied private payroll employment numbers, hours worked per week and wages earned per hour for individual sectors relative to the same statistics when the Great Recession started. The tables below show these for three periods: 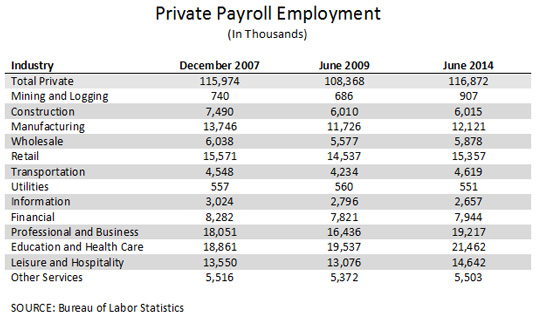 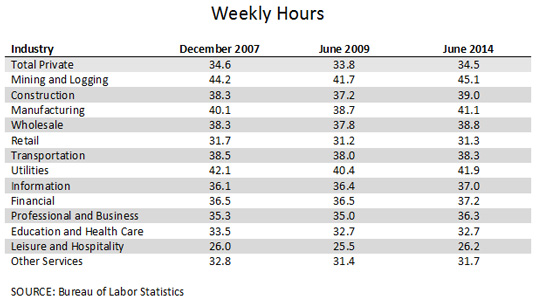 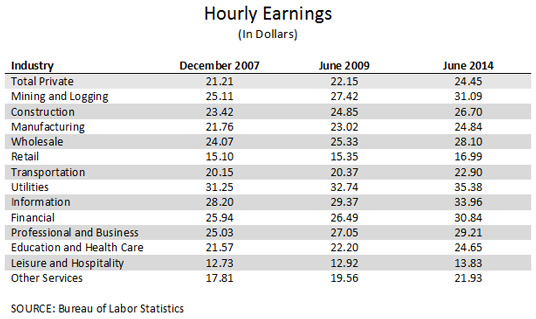 Comparing the latest numbers with those in December 2007, the manufacturing and construction sectors have seen the largest declines in employment levels. These two sectors were the two biggest losers in terms of percentages of jobs lost during the recession: Manufacturing lost more than 2 million jobs (14.7 percent), and construction lost almost 1.5 million jobs (19.8 percent). Even though manufacturing’s employment has improved since the recession’s end, it remained 11.8 percent below its December 2007 level as of June 2014. Construction employment was essentially unchanged since the end of the recession.

In contrast, the sectors that gained the most employees relative to the beginning of the recession are:

The professional and business services sector gained almost 1.2 million employees relative to December 2007 and represented 16.4 percent of total private payroll employment as of June 2014. Workers in this sector worked 5.2 percent more hours per week and earned 19.5 percent more per hour than the average worker across all sectors.

The education and health care sector increased its payroll by more than 2.6 million workers and represented 18.4 percent of total private payroll employment. However, employees worked 5.2 percent fewer hours and earned 0.8 percent more per hour than the average across sectors.

Finally, the leisure and hospitality sector, which represented 12.5 percent of total private payroll employment as of June 2014, employed 1.1 million more workers than before the recession, but most of the those workers were part-time workers earning on average 43.4 percent less per hour than the average across sectors.

In conclusion, private payroll employment in June 2014 was slightly higher than in December 2007, and while most of the job losses occurred in the construction and manufacturing sectors (full-time jobs with average hourly earnings), most of the new jobs averaged 32 hours or more per week, with average or slightly higher than average hourly earnings. The only exception seems to be jobs in the leisure and hospitality sector. Therefore, there are no clear signs in private payroll employment statistics of higher levels of labor underutilization relative to December 2007.