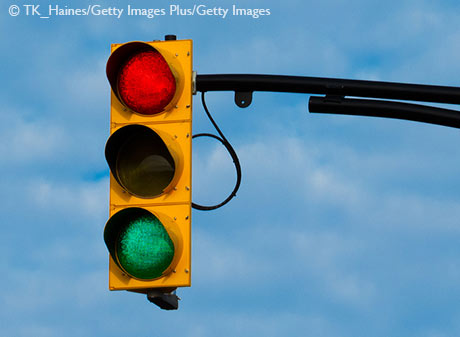 Financial markets, and some economists, are becoming increasingly concerned that the U.S. economy will soon slide into recession. To help insure against a further erosion in activity, the Federal Open Market Committee (FOMC) reduced its policy rate—the federal funds rate target range—at the conclusion of its July 30-31 meeting, and Federal Reserve Chair Jerome Powell hinted that further cuts may be forthcoming.

Similar concerns are shared abroad. Germany, Europe’s locomotive, appears headed for a recession—a development likely to trigger another round of easing by the European Central Bank. Meanwhile, the powerhouse of Asia—China—has weakened mostly because of a tit-for-tat tariff war with the United States. The pace of growth in Canada and Mexico, the two largest U.S. trading partners, has slowed noticeably since 2016-17.

Accordingly, the key question for policymakers, as former Fed Chairman Alan Greenspan put it during the 1998 global financial crisis, is whether the U.S. can remain an oasis of prosperity while storms rage all around.See the remarks by Alan Greenspan at the Haas Annual Business Faculty Research Dialogue, University of California, Berkeley, Calif., on Sept. 4, 1998.

On July 1, the current business expansion, which began in June 2009, became the longest in recorded U.S. history. The economics profession generally does not believe that expansions die of old age. Instead, expansions usually end for well-known causes—such as oil price shocks, a collapse in asset prices, or actions by monetary or fiscal policymakers. Often, it’s not a single event that triggers a recession, but the accumulation of several shocks that tends to boost uncertainty about the economic outlook.

Economists and policymakers have known for decades that high levels of uncertainty can trigger changes in economic behavior that lead to slower growth. For example, consumers tend to increase precautionary saving and delay purchases of big-ticket items. Likewise, businesses postpone plans to expand their capital stock or slow their pace of hiring. Disruptions in the real economy also can adversely affect financial markets. All of these developments have occurred to some extent over the past year or more. The trade tussle between the U.S. and China, which exhibits few signs of ending, appears to be one key factor that explains the upsurge in uncertainty that has fueled an emerging global slowdown.

A yield curve inversion is another signal that markets expect weaker growth over the near term. Briefly, an inversion occurs when yields on long-term Treasury securities (e.g., the benchmark 10-year note) fall below yields on short-term securities (e.g., the three-month Treasury bill). The yield curve inversion itself is not the shock that causes the recession, but it is the market’s response to other events—such as the trade tussle—that leads U.S. and global participants to shift monies from “risky” assets like stocks to “safe” assets like U.S. Treasury securities. And indeed, long-term interest rates have fallen precipitously.

As seen in the figure below, the probability of a recession occurring over the next 12 months was at a little more than 35% in mid-August, according to a model produced by the Federal Reserve Bank of New York. This model uses the measure of the yield curve noted above to predict recessions. However, there are other indicators not captured in the model to assess the likelihood of a coming recession. 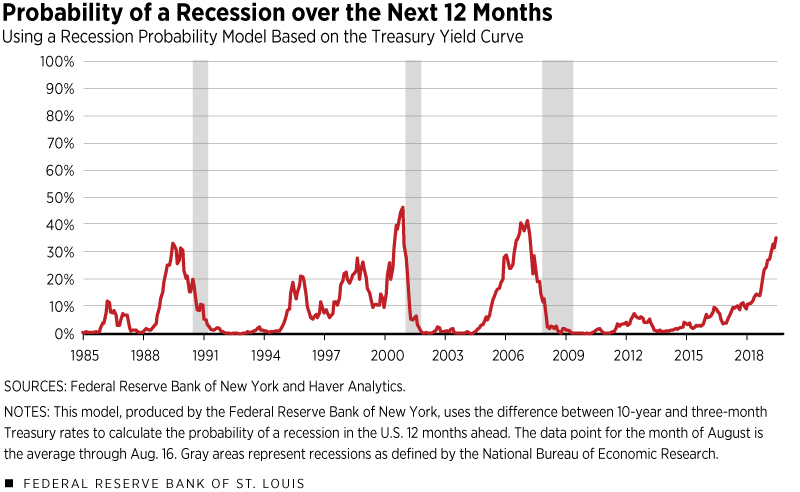 Three key indicators that are sensitive to the state of the business cycle are housing construction, consumer spending and labor markets. Here there are mixed signals. Ominously, real residential fixed investment has declined for six consecutive quarters. However, other indicators such as home sales and homebuilder confidence levels do not show the same degree of deterioration. Indeed, many homebuilders continue to report that supply issues (lack of labor and available building lots) outweigh demand concerns.

By contrast, consumer confidence remains high, and individuals continue to spend at healthy rates. Over the first half of 2019, real personal consumption expenditures rose at about a 2.75% annual rate. Strong retail sales growth continued into July, setting the stage for solid growth in the third quarter. Consumer spending has been bolstered by strong growth of real after-tax incomes (up 3.5% over the past year) and healthy labor market conditions. Indeed, weekly initial claims for state unemployment insurance benefits—often termed the labor market’s canary in the coal mine—remain low and indicate firms are not reducing their workforce in a fashion that would be consistent with the early stages of a recession.

Although the perilous combination of high uncertainty, an inverted yield curve and a pullback in manufacturing activity has often been an accurate predictor of recession, healthy consumer spending and continued strong hiring by firms suggest that the economy is in good shape. However, if these two pillars of growth begin to crack, then the likelihood of recession will rise even more. Fortunately, inflation remains contained, giving the FOMC the room to reduce rates further if necessary.

Kevin L. Kliesen is a business economist and research officer at the Federal Reserve Bank of St. Louis. His research interests include business economics and monetary and fiscal policy analysis. He joined the St. Louis Fed in 1988. Read more about the author and his research.

Kevin L. Kliesen is a business economist and research officer at the Federal Reserve Bank of St. Louis. His research interests include business economics and monetary and fiscal policy analysis. He joined the St. Louis Fed in 1988. Read more about the author and his research.