The Memphis metropolitan statistical area (MSA), which includes parts of Tennessee, Mississippi and Arkansas, is the second largest MSA in both Tennessee and the Federal Reserve's Eighth District. As of July 2013, the Memphis MSA had a population of 1,341,690 and a labor force of 623,277. In 2011, the most recent year for which data are available, per capita personal income was $38,622, roughly 6.5 percent less than the national average.

Since the early 19th century, Memphis has served as an important transportation and distribution center. Memphis' safe location, high on the bluffs above the flood-prone Mississippi River, made the city a natural center for storing and shipping agricultural commodities, as well as a logical terminal for roads and railways. By the early 20th century, Memphis had grown into a leading world market for several commodities, including cotton and hardwood lumber. Today, the city is a vital logistics and distribution hub and a center for cutting-edge medical research and treatment.

However, Memphis may be best-known for its cultural exports that developed from the fusion of diverse musical traditions into new, distinct styles. Memphis, "home of the blues and birthplace of rock 'n' roll," produced American music icons such as B.B. King, Elvis Presley, Jerry Lee Lewis and Johnny Cash.

The Memphis metro population has grown at a moderate pace for several decades, although the distribution of population within the MSA has changed. Between 2002 and 2012, Memphis' population grew 8.7 percent, slower than both Tennessee's growth (11.4 percent) and the nation's (9.1 percent). While the population is heavily concentrated in Shelby County, Tenn., the past decade has seen rapid growth in outlying counties.

DeSoto County, Miss., the second-largest county in the MSA, grew 40 percent—
10 times Shelby County's rate. Two other counties bordering Shelby County are also responsible for much of the growth in the MSA during the same period: Fayette County and Tipton County, both in Tennessee, grew 24.6 and 16.3 percent, respectively.

Three Fortune 500 companies have headquarters in Memphis: FedEx, International Paper and AutoZone. Delivery services giant FedEx, with 31,000 local employees and $42.7 billion in revenue, is the largest employer in the area. International Paper, the world's largest paper- and forest-products company, employs 2,200 in Memphis. Auto-Zone, a retailer and distributor of auto parts and accessories, employs 1,300 locally.

Distribution is vital to Memphis. The city relies more heavily on the transportation and utilities industries than most other cities do. The 31,000 employees at FedEx, as well as the 33,000 other local employees in the transportation and utilities industry, make up 10.7 percent of employment in Memphis, compared with just 2.5 percent nationally. The city is also an important link in the national and international distribution network. Memphis International Airport is the largest cargo airport by volume in the U.S. and the second-largest in the world,1 while the Port of Memphis is among the busiest river ports in the country.2

The education and health-services industry provides another significant source of economic activity in the city. Methodist Le Bonheur Healthcare and Baptist Memorial Health Care Corp. are among the top local employers, with 9,250 and 7,286 area employees, respectively. Nationally recognized St. Jude Children's Research Hospital has 3,471 local employees. The significant health-services presence in the city, along with the local school districts and the University of Memphis, has made the education and health-services industry the second-largest by employment in the MSA, at 14.5 percent.

While some areas—such as education, health, and professional and business services—have displayed strong growth in recent years, others have experienced weak growth or decline. Memphis has lagged behind much of the nation in the economic recovery. From the second quarter of 2012 to the second quarter of 2013, nonfarm payrolls in Memphis grew 0.9 percent, compared with 1.6 percent nationally. The unemployment rate in Memphis has consistently hovered above the national rate for the past decade, despite slower labor force growth in Memphis than in the U.S. overall. As of July 2013, unemployment stood at 9.4 percent in Memphis.

The slow recovery of housing has been a drag on the local economy. After years of flat or declining growth, housing prices, as measured by the Federal Housing Finance Agency, rose 1.4 percent in the second quarter of 2013 from one year earlier, compared with an increase of 4.0 percent nationally.

A large stock of foreclosed homes continues to weigh down the Memphis housing market. In June, 10.3 homes per 10,000 were foreclosed locally, compared with 5.0 per 10,000 in the nation as a whole. In Memphis, 31.0 percent of single-family homes had mortgages in negative equity during the second quarter of 2013, compared with 23.8 percent nationally. The slow recovery in housing prices, combined with the large fraction of homes in negative equity, has suppressed local consumer demand and will likely continue to hamper Memphis' economic performance.

The struggle of the trade, transportation and utilities industries to recover from
damage inflicted during the recession has also contributed to Memphis' anemic
growth. Retail trade makes up 39 percent of the sector, while wholesale trade and transportation/utilities make up 21 percent and 40 percent, respectively.

Employment in retail trade has been responsible for much of the slow growth. Retail-trade employment has shown negative year-over-year growth rates for much of the past five years, even as employment in this sector has increased nationwide. Growth rates in wholesale trade employment have been largely in line with national growth rates, while transportation and utilities employment in Memphis grew more than twice as fast as in the nation as a whole for most of 2011 and continues to grow despite having since dropped below the national rate. In July 2013, total trade, transportation and utilities employment in Memphis stood at 15,000 fewer jobs than at its prerecession peak in mid-2007, a decrease of 8.5 percent.

A crucial component of the Memphis transportation industry suffered a setback when Delta Airlines dropped Memphis International Airport as a hub in September.
Delta had been paring back service to Memphis ever since the airline inherited the hub in its merger with Northwest Airlines in 2008. While the loss of hub status may reduce the airport's prestige, it is less clear how deeply it will affect the local economy. Delta cut 230 local customer-service and cargo jobs and reduced daily flights to about 60 from a high of 147 in April 2012.

The education and health-services industry has been a bright spot in the local economy. Year-over-year growth in local education and health-services employment has outpaced the national rate for the past two years. In 2012, industry employment grew 3.8 percent in Memphis, compared with 2.0 percent nationally. The industry added 3,300 jobs, representing more than half of the total increase in Memphis payroll employment over the period.

Despite steady growth in a few major industries, the differing conditions across sectors have resulted in a mixed outlook for the Memphis economy.

Developers have recently concluded that market conditions are right to begin projects in areas of Memphis that have long languished. While downtown still struggles with vacant office space, the residential market is heating up. Downtown apartments have a 95 percent occupancy rate, and new residential projects, including the renovation of abandoned historic buildings, have been announced.

Developers are also promoting the rejuvenation of Overton Square, a landmark in midtown Memphis. The area has re-emerged in recent years as an arts and theater district. After a decades-long decline, new boutiques, restaurants and fitness studios are moving in to fill the long-empty storefronts; with a half-dozen new leases in recent months, the property is nearing full occupancy. The city has invested $16 million in a parking structure to handle the increased flow of shoppers and theatergoers.

In the end, Memphis faces many obstacles along the road to economic recovery. Even with recent positive developments, persistently high unemployment, coupled with slow growth in most industries and a sluggish housing market, suggests a long road ahead. If employment growth continues along its current path, Memphis will not hit its 2006 peak level of employment again until about 2019. However, if trends continue, education, health, and professional and business services will remain a source of economic strength. Although the city has a long recovery ahead, strong growth in key industries and urban-renewal projects provide reasons for optimism. 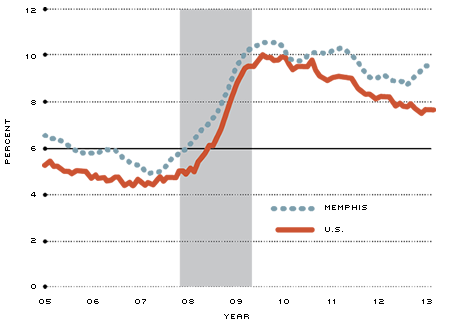 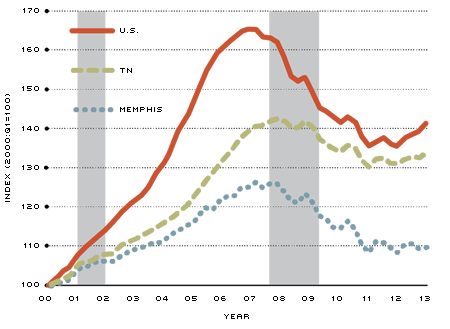 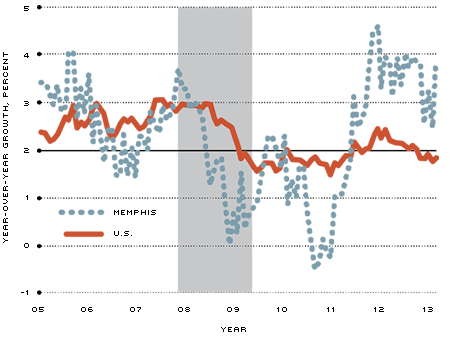 NOTE: Shaded areas indicate U.S. recessions. Data are from the Bureau of Labor Statistics and are easily accessible in the St. Louis Fed's economic database, FRED, using these series IDs: Memphis (MPHEDUH) and US (USEHS). 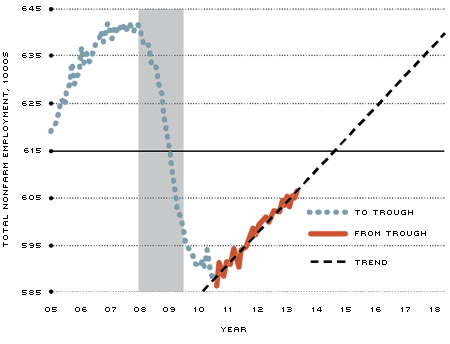 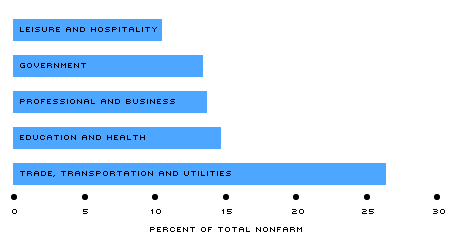 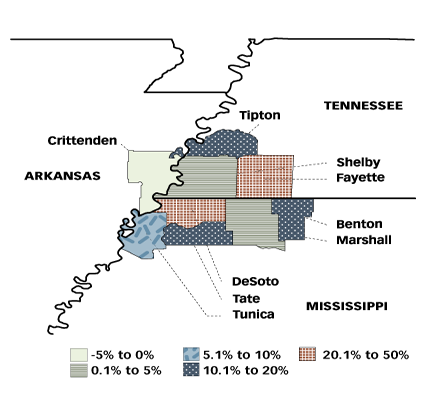 NOTES: Population and employment are from the Census Bureau and Bureau of Labor Statistics and are easily accessible in the St. Louis Fed's economic database, FRED (Federal Reserve Economic Data). For the first two panels and map, see these FRED series (IDs in parentheses): Population (MPHPOP); Labor Force (MPHLF); Unemployment Rate (MPHUR); Personal Income (MPHPCPI); Leisure and Hospitality (MPHLEIH); Government (MPHGOVT); Professional and Business (MPHPBSV); Education and Health (MPHEDUH); and Trade, Transportation and Utilities (MPHTRAD). Data for the employers panel are as of December 2012 and come from the Memphis Business Journal Book of Lists.

Charles Gascon is a senior economist at the Federal Reserve Bank of St. Louis. His focus is studying economic conditions in the Eighth District. He joined the St. Louis Fed in 2006. Read more about the author and his research.

Charles Gascon is a senior economist at the Federal Reserve Bank of St. Louis. His focus is studying economic conditions in the Eighth District. He joined the St. Louis Fed in 2006. Read more about the author and his research.

James D. Eubanks is a senior research associate at the Federal Reserve Bank of St. Louis.

James D. Eubanks is a senior research associate at the Federal Reserve Bank of St. Louis.

The Regional Economist offers insights on regional, national and international issues. Views expressed are not necessarily those of the St. Louis Fed or Federal Reserve System.