"When I was your age, I walked 20 miles uphill in the snow to get to school and a gallon of milk only cost a nickel."Who doesn't remember grandparents and relatives sharing similar stories with us at family get-togethers? Today, a gallon of milk at the grocery store will cost more than a nickel, as will other goods that our grandparents paid considerably less for in their day. The overall rise in prices is known to economists as inflation.

Over the long run, inflation is caused by too much growth in the money supply. Monetary inflation is bad because it obscures the price signals that make our market system work efficiently. The job of monetary policy is to supply just the right amount of money so that the average price level remains stable.

Over short periods, however, inflation can be influenced by large changes in the market for particular goods and services. Because these bouts of inflation tend to be short-lived and self-correcting, the proper monetary policy response is to ignore them. The problem for the Federal Reserve is to know when inflation is due to excessive monetary growth (requiring a policy response) and when it is due to transitory market fluctuations. To sort out the short-run real effects caused by disruptions to particular markets from the long-run monetary effects caused by Federal Reserve policy, economists have developed techniques to filter the inflation news. Traditionally, economists have excluded food and energy prices in their filtering process, but we find that by filtering out food prices, we might be losing valuable information about inflation.

What's in the Basket?

Economists looking at inflation generally track a price index, which is the average price of a consistent "basket" of consumer goods. The two major price indexes are the Consumer Price Index (CPI) and the Personal Consumption Expenditures Price Index (PCEPI).

The CPI, reported by the Bureau of Labor Statistics, was created for the specific purpose of adjusting veterans' pension benefits for inflation following WWI, while the PCEPI, reported by the Bureau of Economic Analysis, is used to compute the nation's Gross Domestic Product. Both indexes measure the rate of inflation faced by consumers, but the PCEPI is more comprehensive.

Approximately 25 percent of the items in the PCEPI basket are excluded from the CPI basket. A guiding principle for deciding whether an item belongs in the CPI basket is whether it is paid for "out of pocket." The main items in the PCEPI that are not included in the CPI are things that consumers get but don't pay for out of pocket, such as free checking, employer-funded medical care and medical services paid through Medicare and Medicaid. Also, the CPI is an index of inflation for urban dwellers; so, it excludes spending by rural households.

The PCEPI, then, is a larger and broader index that includes a more varied bundle of goods than the CPI does. Although both are valid for gauging inflation, in 2000 the Federal Reserve began reporting its inflation forecasts in terms of the PCEPI instead of the CPI. Because of the PCEPI's wider basket of goods and the Fed's focus on it, we'll look only at the PCEPI, although our conclusions also apply to the CPI.1

When tracking inflation, people monitor data releases to predict the underlying inflation trend, which is driven solely by monetary policy. However, information about the inflation trend has been compared to a radio signal that is obscured by static. Just as noise filters are used to remove the static in radio signals, economists filter inflation data to remove the static caused by supply and demand changes. One way to filter the inflation news is to measure the change in prices over a long period, such as a year, to eliminate the short-run fluctuations. But then, the useful information is delayed for a year.

Another way that economists filter out the static is to delete the items in the price index that are sensitive to large, frequent disturbances to supply and demand and, therefore, have highly volatile prices. After deleting these items, what is left is core inflation, that is, inflation in the basket of goods excluding the more volatile components. Since the 1970s, core inflation has typically been measured by excluding food and energy from the basket of goods. This is because the early 1970s saw highly volatile food prices and, soon afterward, a rapid rise in the prices of gas, oil and other energy products.

Let's take a closer look at the changes in the prices of components excluded from the core: food and energy. From Figure 2, we see that inflation in energy prices indeed has been very volatile, increasing and decreasing much more than the food component or the all-item PCEPI. We also see that food prices have become increasingly stable recently, while energy prices continue to fluctuate significantly.

What has caused the recent increase in the stability of food prices? Improvements in technology and a change in consumer eating habits have both contributed.2 Major advancements in the food distribution system have led to shorter lag times between picking produce at the farm and getting it into the hands of urban consumers. It is not unusual, as it once was, for a shopper in a supermarket in Chicago to be buying fresh produce grown in South America. As technological advances have reduced the cost of air freight and refrigeration, their use has become widespread and commonplace in the food industry, increasing the geographic size of the market for food and reducing the volatility of food prices.

Another change in the food distribution system is that many more people now buy their food from large grocery store chains. These large chains have an advantage over smaller specialty retailers in that they have the ability to stock larger quantities of many more different types of items. Large supermarkets purchase food directly from the producers in huge quantities, cutting the cost to themselves and their consumers.

Eating habits of the American consumer also have changed. With the hectic schedule many Americans have, people are less inclined to buy fresh fruit, vegetables, meat and poultry that may go bad in their refrigerators or require time and energy to prepare. People are much more likely to buy prepared meals at the grocery store or to eat at restaurants. The prices that consumers pay for these meals are largely expenditures on the labor used to prepare and serve the food. The price of these labor services is less volatile than is the price of the raw food products.

Should We Put Food Back into the "Core" Basket?

Now that we have identified inflation in food prices as a relatively good indicator for future inflation, we must see how it stacks up against other components of the PCEPI. Forecasters compare results by measuring the size of the forecast error. A standard measure of comparison is the root-mean-square error (RMSE), which tends to penalize large forecast errors—the difference between the actual and forecasted values—more heavily than small forecast errors.3For example, in Figure 3, the PCEPI excluding food and energy would be highly penalized for the big errors in 1983. As we did with the food component, we use the previous year's inflation in various components of the PCEPI as alternative forecasts of future inflation. We then calculate the RMSEs to evaluate the relative accuracy of these forecasts.

Comparing the past year's inflation in food prices to the prices of other components that comprise the PCEPI (as in Table 1), we find that the food component still ranks the best among them all. Food has the smallest RMSE (0.99), while energy has the largest RMSE (10.52). This implies that past inflation in food has been a good predictor of overall inflation.

To assume that the food shocks of the 1970s will never be repeated is probably dangerous. A glance back at Figure 3 shows that the core measure was not really too bad if we exclude 1983. We include the core measure excluding food and energy in Table 1 to show that, with the exception of food, it really is much better than looking at most of the other component measures. We also show that the measure could be improved by putting food back into the mix. The core measure excluding only energy is about 10 percent more accurate than the standard measure. (Its RMSE was only 1.10 percentage points, while the RMSE of the forecast error using inflation in the PCEPI excluding food and energy was 1.23 percentage points.) 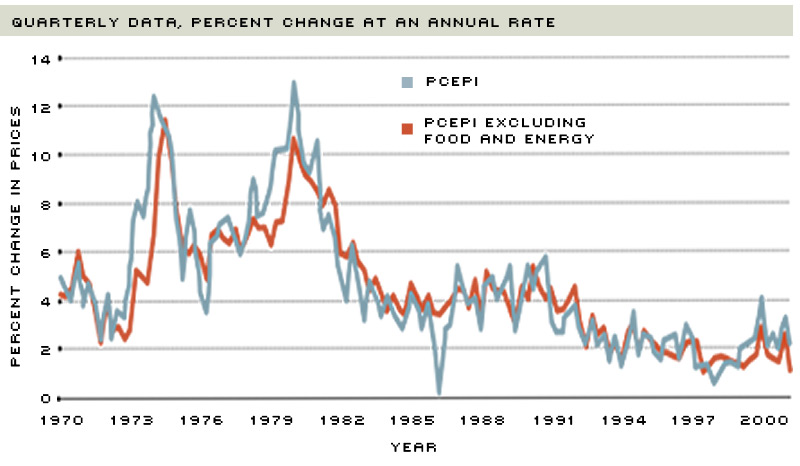 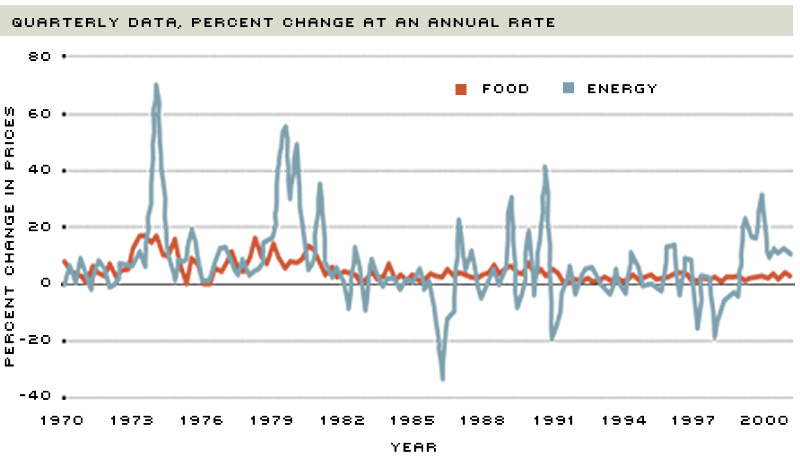 Typical measures of core PCEPI inflation have excluded food and energy prices because of their volatility. However, due to advances in food distribution technology and changes in consumer eating habits, food prices have stabilized recently, while energy prices continue to fluctuate dramatically. By continuing to exclude food from core inflation, we might be losing information about the underlying inflation trend. [back to text]

Forecast Errors of Food and PCEPI Excluding Food and Energy 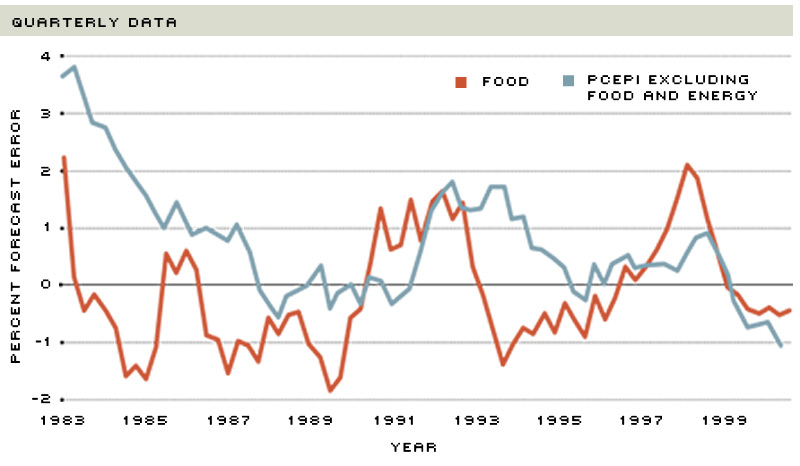 The Ability of PCEPI Components to Predict Inflation

The better that past inflation in a component of the PCEPI is able to forecast overall inflation, the better an indicator it is of the true inflation trend. The root-mean-square-error (RMSE) measures how far away a forecast is from the actual measured value and is, therefore, a measure of how good a forecast is. Components with a smaller RMSE are better at forecasting future overall inflation. Here, we see that food has the lowest RMSE, indicating that we might be losing valuable information about trend inflation by removing it from our measure of core inflation. [back to text]

The Regional Economist offers insights on regional, national and international issues. Views expressed are not necessarily those of the St. Louis Fed or Federal Reserve System.