Signals Are Mixed, but Optimism Is on the Rise

The U.S. economy ended 2016 on a soft note, based on the advance estimate for real gross domestic product (GDP) growth for the fourth quarter. Still, economic conditions last year were broadly similar to those seen during this business expansion: modest growth, low inflation and mostly healthy labor market conditions. The majority of forecasters expect more of the same this year, although optimism appears much brighter in financial markets and among consumers and businesses.

After registering a 3.5 percent annualized rate of growth in the third quarter, the pace of U.S. economic activity slowed to a 1.9 percent rate over the final three months of the year. Nevertheless, real GDP growth was measurably stronger over the second half of 2016 than it was over the first half of the year. Overall, U.S. real GDP increased by 1.9 percent in 2016. This increase matched 2015's pace and was only slightly less than the average growth rate of 2.1 percent for this business expansion, which started in June 2009.

Although top-line real GDP growth in 2016 was unchanged from a year earlier, the composition of growth changed in several key dimensions. First, the growth of real consumer spending was modestly stronger, particularly for durable goods like motor vehicles, as was the growth of real exports of goods and services. Second, real business fixed investment, real residential fixed investment and government expenditures all grew at a slower pace in 2016 compared with 2015.

Labor market conditions remained solid in 2016. Monthly job gains averaged about 187,000, markedly slower than the 226,000 per-month job gains registered in 2015 but still well above the underlying growth of the labor force. Accordingly, the unemployment rate fell from an average of 5.3 percent in 2015 to 4.8 percent in 2016—its lowest rate since 2007. Real labor compensation (wages and salaries plus supplements, like employer-provided health insurance) paid to domestic employees increased by 2.3 percent in 2016, about half the pace seen in 2015.

As forecasters peer into their crystal ball, the unknowns seem more pronounced this year than usual for several reasons.

First, the new administration has promised a marked change in the direction of economic policies. Some of these proposals—such as cuts in the corporate tax rate, increased expenditures on defense and infrastructure, and regulatory relief—should have positive effects on the economy. However, other proposals, such as those that could impinge on international trade in goods and services, would tend to raise domestic prices, weaken the benefits of competition and slow economic growth. Despite this uncertainty, consumer and business confidence has soared since the presidential election, helping to push stock prices to record highs.

Expectations of faster growth, and perhaps the risk of higher inflation, have also driven long-term interest rates higher and boosted the value of the U.S. dollar.

Second, most of the world's major oil producers have agreed to cut production in an effort to raise the world price of oil. If successful, higher oil prices will benefit domestic oil producers and, thus, help to raise real GDP growth via increased investment in oil and mining exploration. Indeed, falling oil prices have been a drag on business investment for much of the past three years. However, higher energy costs will also raise the cost of production for energy-using industries, like airlines and trucking. Of course, consumers will also pay more at the pump for gasoline, which will increase inflation (if only temporarily).

Third, most Federal Reserve policymakers have signaled that they are likely to continue raising the federal funds interest rate target in 2017. Any unexpected changes in monetary policy—whether tighter or more accommodative—will naturally influence expectations of future growth, inflation and financial market asset prices.

Coping with economic uncertainty is an ongoing challenge for economists and forecasters. But this challenge becomes more difficult when key inputs in the forecasting process have a larger degree of uncertainty. Until the direction of monetary and fiscal policies becomes better known, they are but one more unknown upon a layer of other unknowns. This, as much as anything, explains why the majority of forecasters expect economic conditions in 2017 to look much like 2016's.

Kevin L. Kliesen is an economist at the Federal Reserve Bank of St. Louis. Brian Levine, a research associate at the Bank, provided research assistance. See http://research.stlouisfed.org/econ/kliesen for more on Kliesen’s work. 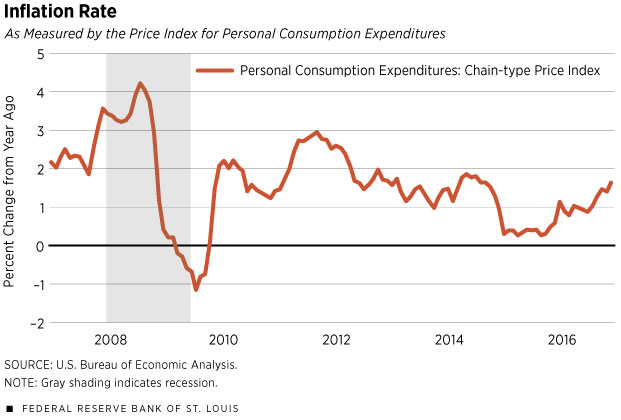 Kevin L. Kliesen is a business economist and research officer at the Federal Reserve Bank of St. Louis. His research interests include business economics, and monetary and fiscal policy analysis. He joined the St. Louis Fed in 1988. Read more about the author and his research.

Kevin L. Kliesen is a business economist and research officer at the Federal Reserve Bank of St. Louis. His research interests include business economics, and monetary and fiscal policy analysis. He joined the St. Louis Fed in 1988. Read more about the author and his research.