In recent months, average apartment rents and house prices have grown faster than incomes and inflation nationwide, skyrocketing to record highs in some metro areas.

However, this follows a longer period during which housing affordability across the U.S. generally increased; that is, housing costs increased more slowly than incomes.

The net result is that, on average for the nation as a whole and in many locations, both apartment rents and house prices are lower in 2016 relative to per capita incomes than they were 25 years ago. Thus, despite the recent rapid increases in rents and house prices in some high-profile areas, housing generally remains more affordable for the average family today than a quarter-century ago.

Both of these rates of increase easily outpaced overall inflation of 1.3 percent during this period.2 In addition, they increased slightly faster than per capita personal income, which expanded at an annual average rate of 3 percent.3 Thus, housing costs have increased in real terms and faster than income growth, reducing average housing affordability.

However, over the long term, housing costs generally have increased more slowly than per capita incomes.

Figure 1 shows that over the past 25 years, apartment rents across the country increased at a rate just under 3 percent annually, with house prices rising an average 3.1 percent. While the all-items CPI inflation rate was 2.3 percent, per capita personal income grew at an annual rate of 3.6 percent, outpacing both housing costs and overall inflation.4 Despite house prices and rents rising faster than inflation, housing affordability has actually improved nationwide during the past quarter-century.

To be sure, rents and house prices have increased faster in some regions and metro areas than others in recent years. To illustrate differing regional trends in housing costs, incomes and inflation since 2011, Table 1 provides data for one major metropolitan area in each of the four U.S. census regions: Atlanta in the South, Chicago in the Midwest, Los Angeles in the West and New York in the Northeast.

However, only Atlanta and Los Angeles clearly showed a decline in housing affordability, since growth in both house prices and rent prices exceeded per capita income growth in those cities. In Chicago, house prices grew faster than incomes, but rents grew more slowly. In New York, both house and rent prices grew more slowly than incomes. Thus, while housing costs increased in real terms in all four cities during the last five years, trends in housing affordability were mixed.

Table 2 summarizes trends in housing costs, income and inflation for Atlanta, Chicago, Los Angeles and New York since 1991. First, note that apartment rents and house prices increased faster than the overall rate of inflation in every city. By these measures, housing has become more expensive in real terms.

Growth in per capita personal income is a benchmark for determining affordability and, since 1991, housing has become more affordable on this measure for the average person in all four major metro areas (or essentially has not changed in the case of Los Angeles house prices.) In cities with relatively fast growth in rent and house prices like Los Angeles and New York, per capita income growth has also been relatively strong. At the same time, incomes grew more slowly in cities like Atlanta and Chicago, but housing costs also grew more slowly. As the last two rows in Table 2 make clear, long-term housing affordability for the average family generally has improved in all four cities and for both rented and owned housing during the last quarter-century. Only Los Angeles owner-occupied housing represents a counter-example to this conclusion, albeit a small one.

Cycles versus trends in the long view of housing affordability 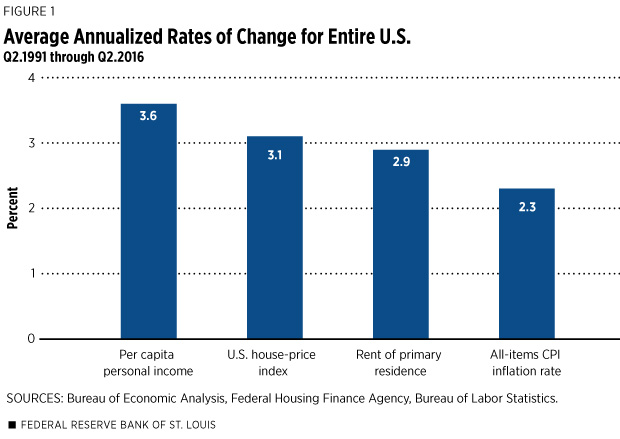 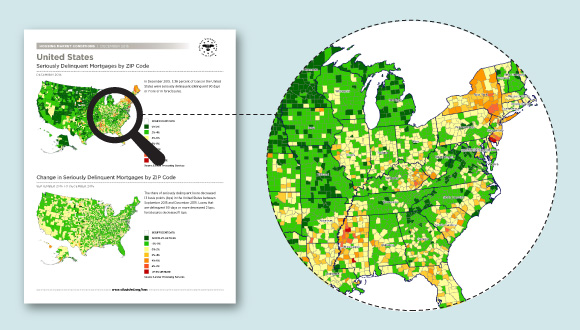 Housing Market Perspectives is published by the Community Development group at the Federal Reserve Bank of St. Louis as part of its quarterly Housing Market Conditions report, which provides an overview of housing market conditions in the U.S. and for the seven states that comprise the Federal Reserve’s Eighth District and the Metropolitan Statistical Areas (MSA) of Little Rock, Louisville, Memphis and St. Louis.

This article originally appeared in our Housing Market Perspectives publication.