Liftoff and the Natural Rate of Interest

Financial markets have become focused on if and when the Federal Reserve should “lift off,” that is, depart from its zero interest rate policy. In a recent Economic Synopses essay, I discussed issues related to liftoff. This post draws from that article to discuss liftoff using two concepts from a central banker’s toolkit: the natural rate of interest and monetary policy.

Importantly, the natural rate cannot be directly measured, unlike nominal interest rates or stock prices. Despite the measurement problem, the natural rate is viewed, in some circles, as a useful concept for the Federal Open Market Committee (FOMC) in setting the federal funds rate.

John Taylor of Stanford University, the economist who first applied the natural rate to a specific, practical monetary policy rule, sets its value at 2 percent.2 His formula is known as the Taylor rule. The natural rate is one component of that formula.

Taylor also makes the case that, in periods of successful monetary policy, the federal funds rate has closely tracked the rate implied by the Taylor rule. In his view, the Taylor rule is descriptive of these successful episodes (from a macroeconomic perspective) in the past and also prescriptive for the future. The figure below plots the real interest rate implied by the Taylor rule between 1995 and 2014 (the orange line, using 2 percent as the natural rate) and the historical real federal funds rate (the blue line).3

The nominal federal funds rate is bounded below by zero, but this zero bound doesn’t imply a lower bound on the (expected) real interest rate. However, if inflation expectations are well-anchored at least in the short run, then the short-term real rate could be considered to also have a lower bound.4 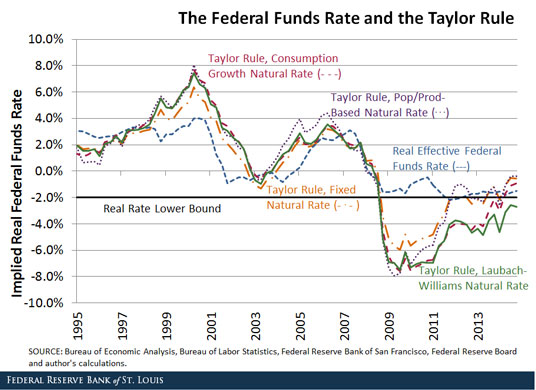 Three things jump out when examining the post-2007 side of the figure. First, the Taylor rule rate fell dramatically below the lower bound during the financial crisis, primarily because of a large deviation of output from its potential. When output declined during the recession and stayed below its long-run historical trend, the Taylor rule implied that the real rate should fall substantially below zero.

Third, over the past year or so, the Taylor rule rate has been above the lower bound since the gap between actual and potential output largely closed as the economy began to recover. In practical terms, it means that if one were to use the Taylor rule to conduct monetary policy, then the lower bound on interest rates no longer binds, and the time has come for the FOMC to lessen its accommodative stance by raising the federal funds rate.

The purple line in the figure above plots the Taylor rule implied interest rate based on the time-varying natural rate. Over the past 10 years, except for one year beginning in mid-2009, the rates implied by this modified Taylor rule and the standard Taylor rule track each other very closely. Most significantly, the policy rate implied by the modified Taylor rule is above both the lower bound and the current real effective federal funds rate over the past year, thus also prescribing that the FOMC should begin to raise the federal funds rate.

Notice that this version of the Taylor rule puts the policy rate well above the current real effective funds rate as well as the real rate lower bound. Thus, the consumption-growth natural-rate-based rule also prescribes that the FOMC should begin to raise the federal funds rate.

For a final measure of the natural rate, I looked to John Williams, president of the Federal Reserve Bank of San Francisco, and Thomas Laubach, director of monetary affairs of the Board of Governors: Their alternative method for estimating a time-varying natural rate is constructed, in part, with a statistical technique known as Kalman filtering.7 The green line in the figure above represents this rate.

For most of the sample, the Laubach-Williams implied interest rate tracks the other Taylor rule policies very closely. The most significant departure occurs in the past two years. The interest rate implied by the Taylor rule using this natural rate measure shows a much smaller increase than the other three coming out of the most recent economic downturn. Moreover, that rate remains below the lower bound (black line) at the present time, which suggests that this particular formulation of the Taylor rule implies that the time has not yet come for the FOMC to begin raising the federal funds rate.

The above exposition on liftoff and the natural rate isn’t purely academic. Board of Governors Chair Janet Yellen in recent public communications has discussed the Taylor rule in the context of time-varying natural rate models.8

Taylor's rule now calls for the federal funds rate to be well above zero if the unemployment rate is currently judged to be close to its normal longer-run level and the "normal" level of the real federal funds rate is currently close to its historical average. But the prescription offered by the Taylor rule changes significantly if one instead assumes, as I do, that appreciable slack still remains in the labor market, and that the economy's equilibrium real federal funds rate--that is, the real rate consistent with the economy achieving maximum employment and price stability over the medium term--is currently quite low by historical standards.

Monetary policy rules provide useful yardsticks against which to compare actual FOMC policy actions. I have examined four Taylor rules which each use a distinct measure of the natural rate. All except one of the four place their corresponding Taylor-rule-prescribed target rates above the current federal funds rate as well as the lower bound. Therefore, all but one suggest that the time for liftoff has come.

3 I constructed real interest rates by subtracting inflation from the corresponding nominal rates. I measured inflation using the year-over-year percent change in the consumer price index (less food and energy).

4 The concept of a real rate lower bound is no doubt a loose one, since this lower bound can be breached. In an environment with stable actual and expected inflation, however, one should not see prolonged periods where the real rate is below the lower bound.

5 The population is measured as the civilian noninstitutional population (16+ yrs). Productivity is measured as business sector total factor productivity. Both growth rates are calculated as the 12-quarter average of annualized rates of growth for each quarter. I thank Kevin Kliesen for providing me with the population-productivity-based natural rate measures and the underlying data.

7 Laubach, Thomas; and Williams, John. “Measuring the Natural Rate of Interest,” Review of Economics and Statistics, November 2003, Vol. 85, Issue 4, pp. 1063-1070. Their baseline estimates, updated through the end of 2014, are also available. See also Williams, John. “The Decline in the Natural Rate of Interest,” Federal Reserve Bank of San Francisco, March 2, 2015.

Bill Dupor is an economist and vice president at the Federal Reserve Bank of St. Louis. His research interests include fiscal policy and dynamic economics. He joined the St. Louis Fed in 2013. Read more about the author and his work.

Bill Dupor is an economist and vice president at the Federal Reserve Bank of St. Louis. His research interests include fiscal policy and dynamic economics. He joined the St. Louis Fed in 2013. Read more about the author and his work.