Obstacles and Potential Opportunities for Economic Growth in India

Each issue of The Regional Economist, published by the Federal Reserve Bank of St. Louis, features the section “Ask an Economist,” in which one of the St. Louis Fed’s economists answers a question on his or her field of expertise. The answer below was provided by Vice President and Economist B. Ravikumar

What are the obstacles and potential opportunities for economic growth in India?

There are two main obstacles. The first is labor regulations. Developing economies usually transition from agriculture to manufacturing. But the transition in India has been to the service sector. This is due in part to labor regulations. For instance, a firm with 100 or more workers has to seek permission from the government to reassign the workers to different tasks, to lay off workers or to close the firm. Such regulations impede large-scale manufacturing operations that could employ thousands of workers producing unskilled-labor-intensive products. As a result, the movement of workers from agriculture to manufacturing is practically nonexistent. This is evident in the share of labor force in agriculture in India: It is almost 50 percent. That is a large number.

The second is infrastructure. This is a well-known problem. Decades of underinvestment have left the country with dire deficits in critical areas, such as railways, roads, ports, airports, electricity and water. In the World Economic Forum's Global Competitiveness Report for 2013-14, India ranked 85 out of 148 countries for infrastructure.

The opportunities are extensive. The first one, which people usually are aware of, is that India is well-equipped with talent in science and engineering. The second, not so well-known, is the size and age distribution of the consumers. The chart below depicts the age distribution of the population. Just to give you some perspective, there are more than 600 million people in India aged 25 or younger. How big is that? Well, if you added up the entire populations of the U.S., Mexico and Canada, you wouldn't come to even 500 million. So, India is a big market. And this, of course, will be the working-age population in the next few decades, when these millions will be not only earning but also spending. These are potentially good opportunities not only for India but also for U.S. firms that sell consumer goods abroad. 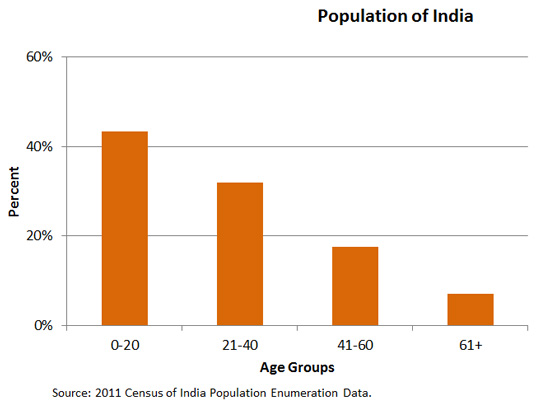 To overcome the obstacles and take advantage of the opportunities, India has to be more efficient at managing its resources. Economists use total factor productivity (TFP) to measure such efficiency. A country with a high TFP produces more with a given amount of inputs, such as capital and labor, than does a country with a low TFP. The economic reforms since 1991 have indeed increased India's efficiency. Before the reforms (1960-1991), TFP growth accounted for 15 percent of GDP growth, but between 1991 and 2011 TFP growth accounted for almost 25 percent of the GDP growth. So, the prognosis based on TFP looks promising for India's future.